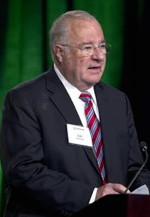 Ed. Note: This piece was first published in the USA Today.

Warning: we’re about to mix politics and baseball, something many fans welcome as much as a three-hour rain delay. And while all sides will insist there is no connection, the dynamics still bear watching.

We’re talking about conservative billionaire Joe Ricketts, the patriarch of the Ricketts family that owns the Chicago Cubs. The New York Times reports that high-profile Republican strategists are working with Ricketts on a proposal to mount a $10 million super-PAC campaign linking President Obama to controversial comments of the Rev. Jeremiah Wright, re-igniting the debate from the 2008 campaign.

According to the Times: “The world is about to see Jeremiah Wright and understand his influence on Barack Obama for the first time in a big, attention-arresting way,” says the proposal, which was overseen by Fred Davis and commissioned by Joe Ricketts, the founder of the brokerage firm TD Ameritrade. Mr. Ricketts is increasingly putting his fortune to work in conservative politics.

The senior Ricketts’ politics, and financial support, are nothing new. But as Craig Calcaterra notes in his blog on NBC Sports HardballTalk, the founder and chairman of the anti-government-spending political action committee “Ending Spending Action Fund” apparently has no problem with the fact his son Tom, Cubs’ chairman, “received millions for a new spring training facility in Arizona and continues to ask for tax dollars to renovate Wrigley Field.”

The interesting dynamic for Cubs’ fans: remember that Chicago Mayor Rahm Emanuel, the man Tom Ricketts must convince to pony up public funding for a share of the Wrigley renovations, is Obama’s former White House chief of staff. And Illinois Gov. Pat Quinn, a principal in any effort for state funding, is also a loyal Democrat.

The Washington Post quoted an unnamed aide to Emanuel saying the mayor was “livid” when he read of the proposed ad campaign, as well as the Ricketts’ “blatant hypocrisy.” The Post quoted the aide saying Emanuel was refusing to return calls from the family.

The Times reports the Republican advertising proposal is “one of several being studied” by the senior Ricketts. And the 54-page proposal, a copy of which was obtained by the Times:

… includes preparations for how to respond to the charges of race-baiting it envisions if it highlights Mr. Obama’s former ties to Mr. Wright, who espouses what is known as “black liberation theology.”

The group suggested hiring as a spokesman an “extremely literate conservative African-American” who can argue that Mr. Obama misled the nation by presenting himself as what the proposal calls a “metrosexual, black Abe Lincoln.”

Tom Ricketts’ three siblings are also on the Cubs board, but their politics aren’t necessarily aligned. The Times notes that Tom’s brother Pete is a member of the Republic National Committee while sister Laura, an advocate on behalf of the LGBT (Lesbian, Gay, Bisexual & Transgender) community, is a major contributor to Obama’s re-election campaign.

And while we’re mixing politics and baseball, one more to chew on: Our commander-in-chief is, of course, a die-hard Chicago White Sox fan.