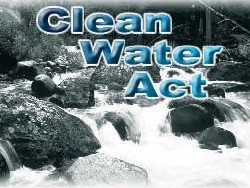 We are coming up on the 40th anniversary of the Clean Water Act, and in many ways, we have made remarkable progress since Congress passed this landmark bill. Bottom line, rivers no longer light on fire like the Cuyahoga did in 1969. Yet despite this progress, bacteria, sewage and industrial waste still pollute too many waterways, threatening our health. A legal loophole has put millions of acres of wetlands and thousands of streams at risk, including drinking water sources for 117 million Americans. Environment America has been promoting policy solutions and organizing grassroots support to help solve these problems for many years. Since 2006, we have been urging Congress reverse the damage done by the Supreme Court’s decision in Rapanos simply by declaring, once and for all, that the Clean Water Act protects all of America’s waters. Last year, we finally moved at least a compromise bill out of the Senate Environment and Public Works Committee. But industry opponents, including the Farm Bureau, maintained a virtual lock on the issue in the House. And then came the 2010 elections, which turned the prospect of a Congressional solution from dim to non-existent.

Our sights turned to the Obama Administration. On April 27th, EPA Administrator Lisa Jackson came to Milwaukee and announced a plan to close the loopholes created by the courts and to restore Clean Water Act protections to waters across the country. Administrator Jackson was joined at this event by Wisconsin Environment’s Megan Severson.

As expected, the reaction from polluting industries was swift and furious. Mining companies, developers and corporate agribusiness attacked the plan as a job-killer in the media, and urged their allies in Congress to stop EPA from closing the clean water loophole. Exxon-Mobil even threatened “legal warfare” over the issue. Unfortunately, their hysteria began to have an effect. By mid-July, the House of Representatives had voted not only to halt EPA’s new initiatives on clean water, but also to invalidate the agency’s Chesapeake Bay cleanup plan, block standards to reduce pollution in the Everglades, and cut funding for EPA’s water programs.

Fortunately, we had anticipated this assault, and had already begun building support to defend EPA’s clean water initiatives. From Colorado to Florida, New Hampshire to Texas and in other states in between, our staff spoke face to face with more than 450,000 Americans about clean water. By the close of EPA’s public comment period, nearly 200,000 citizens, mobilized through our work and that of our allies, had written to tell EPA to stand strong for clean water. Our efforts generated media coverage in outlets nationwide, including the Denver Post, the Dallas Morning News, the St. Cloud Times, and dozens of other print, radio, television and online outlets

As important as the EPA’s work is, in addition to our grassroots field effort we’ve also been busy using the courts to take on water polluters directly. In June, PennEnvironment and Sierra Club reached a $3.75 million settlement in a case involving a staggering 8,684 illegal discharges from GenOn’s power plant into the Conemaugh River. The figure marks the largest penalty ever paid in Pennsylvania under the Act, sending a clear message to polluters and providing needed resources to restoring the river.

And in Rhode Island, we reached a settlement agreement with the City of Newport to end sewage overflows and runoff pollution that have plagued the area’s renowned beaches and Narragansett Bay. Beyond stopping the pollution, the settlement Environment Rhode Island reached includes provisions for the City to use green infrastructure to prevent runoff pollution.

Obviously much more is yet to be done. Over the next several months, we expect polluters and their allies to use the budget process in Congress to again try to derail EPA’s clean water plans. Believing that these unprecedented attacks on our water requires an unprecedented response, I am working with colleagues in the community to muster a coordinated response – organizing ourselves both in DC and more importantly outside the beltway to ensure the public is ready to stand up for the waterways we cherish.

As things continue to unfold in Washington DC, experience shows that the most critical work we can do to ensure that protections for clean water are as strong as possible will happen in cities and towns across the country. From the Chesapeake Bay to the Great Lakes to Puget Sound, there is no doubt that most Americans care deeply about clean water.