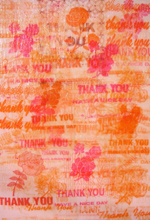 Just in time for Spring, DA Arts is hosting a show of a dozen bright, clear works that manage to remain uncomplicated – despite a plethora of allusions to 21st Century icons and cultural concerns. All are perfectly executed and hold their own given the size and scope of this gallery.

But because of lack of signage at the actual gallery – and not in cyberspace – this reviewer spent a lot of time trying to figure out the medium. Oil on canvas? Wax? Giclee? Some other printing or mono-printing process? This reviewer nearly missed the whole point, as will the casual passerby.

The title of the show – also not anywhere alluded to on site – is “Bags.” That is also the medium in which this artist so ably works.

Paper or plastic? Knowing this would greatly enhance the appreciation, and technical appreciation of this show. After all, this is a drive-by gallery, not a website. The hanging of the show is spare and elegant, and a great counterpoint to the visually packed works. Goofy, Safeway, and Figaro are some neighborhood favorites.

Which brings us to the mysterious Bloum – scrawled large and rough, graffiti style, under a particularly striking piece. Is this one word separated from the canvases, grabbing attention immediately because it is on the wall, the force that subliminally sets up the expectation of flowers?

Turns out to be the artist’s name. All very Joycean. In signing this way, the artist brilliantly breaks a cardinal rule of the visual arts – simply stated, that the signature should display the same character of marks as the body of the work, not to mention it should be on the same surface as said work. Well done.

The word from Sixth Street, as represented by those interviewed in front of D.A. Arts is: “a little bit more.” Apparently, there is a voracious appetite for the Fine Arts in this area.

In this instance, the cool spare presentation provided sophisticated counterpoint to these particular works – busy but never crossing the line into overkill, compulsive marking. An accomplished, mature body of work that would look good anywhere, and could go anywhere, if anyone could ever get the contact information.