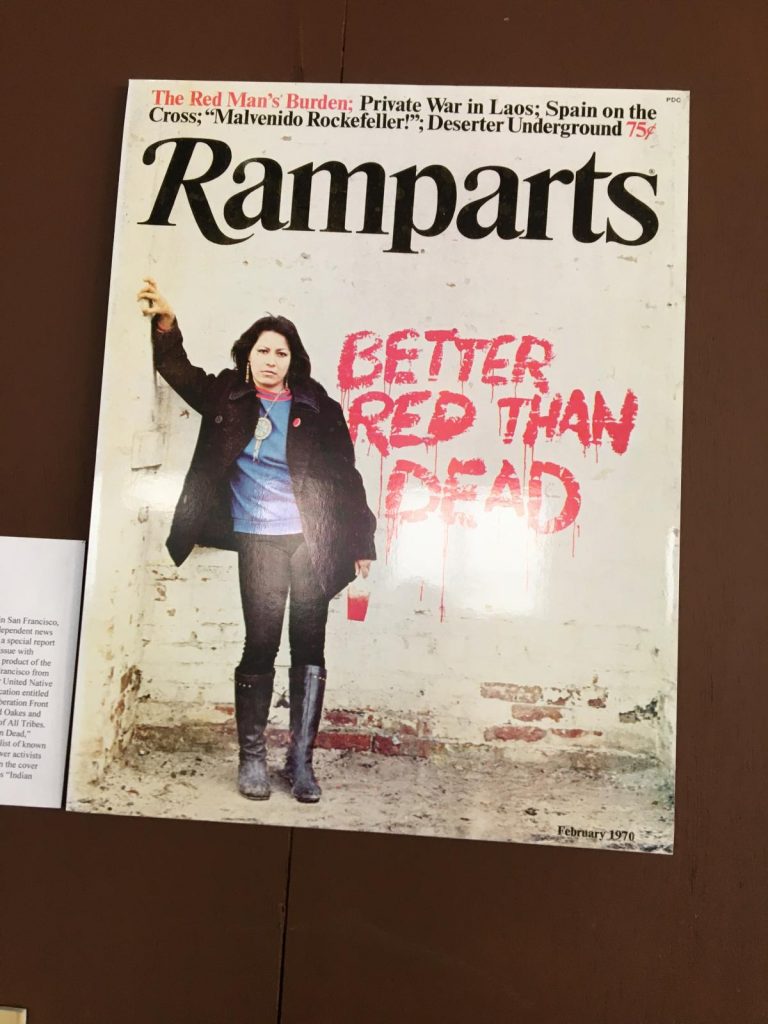 “The Rock” isn’t as unlikely a setting for art as it might initially seem. The Chinese artist Ai Weiwei exhibited his work there in 2014 and 2015. Now, in the New Industries Building, where Weiwei’s large-scale sculpture, sound, and mixed-media works were installed, there’s an exhibit of art by and about American Indians.

In November 1969, during their occupation of Alcatraz, “the Indians of all Tribes” issued a “Proclamation” that called for “an American Indian Museum” that “would show the noble and tragic events of Indian history” including “the Trail of Tears” and “the Massacre at Wounded Knee.”

It could serve as “a Center for Native American Studies,” an “American Indian Spiritual Center,” an “Indian Center of Ecology” and a “Great Indian Training School.” None of those suggestions have been translated into reality, though Indians haven’t forgotten them. Bay Area Indians still want a museum. The work on display in the New Industries Building on Alcatraz is the closest thing to it.

For Alan Harrison, Pomo and Modoc— who could play an American Indian in a western—and Eloy Martinez, a Southern Ute, and a visionary, the exhibit is a vivid reminder of their time on the Rock. Harrison was a boy. Martinez was already an adult. Both of them traveled with me to Alcatraz, accompanied me as we wandered, talked as we walked and provided living history.

“The occupation turned me into a radical,” Harrison told me. “I remember the sense of urgency. We had to clean up our act, even us kids and take responsibility. Helicopters with machine guns flew overhead and we never knew if they would shoot us.”

Martinez was probably the most practical fellow on the island during the occupation. A skilled worker, he fixed things that didn’t work properly. Before Alcatraz, he joined Cesar Chavez, Dolores Huerta and the United Farm Workers in the Central Valley.

For several years, after Alcatraz, Martinez was the director of the Intertribal Friendship House in Oakland. Last year, he lobbied for an “Indians of All Tribes Day” on the Rock and persuaded the National Park Service to host an annual event for Indians on the island.

All day long, when we visited Alcatraz near the end of summer, Martinez buttonholed tourists and recounted Native American history.

The life-size black-and-white photos—which are the most eye-catching and memorable images in the exhibit—depict some of the Indians who took part in the invasion and occupation of Alcatraz in 1969, 1970 and 1971 when the whole world was watching. Many of the  photos are so big they had to be brought to the island aboard a barge.

Alcatraz was a “great awakening,” Adam Fortunate Eagle, Red Lake Chippewa, exclaims in Heart of the Rock, which he wrote with San Francisco Chronicle reporter, Tim Findley. It was published decades after federal marshals removed the last of the occupiers: men, women and children.

In addition to the dramatic photos by Ilka Hartmann and Stephen Shames, both of them whites, there are sketches by the renowned Native American artist, Earl Livermore, Black Foot, which he drew on the island during the occupation.

“I feel the weight of history here,” Hartmann told a tourist who had come to the island to visit the remains of the prison and was surprised to see the exhibit of Indian art that includes a slideshow of images by Brooks Townes. They were taken in the first nine days of the occupation and traveled around the county.

In a way, the whole island is an outdoor museum that honors the memory of the occupiers. When tourists arrive on the ferry from San Francisco they read the words, “Welcome to Indian Land” painted in red on a wall of the old prison, where Native Americans—Papagoes, Paiutes, Apaches, Shoshones, Hopis, and Modoc—were

incarcerated from 1934 to 1963, along with gangsters like Al Capone and George “Machine Gun” Kelly.

Photographer Brooks Townes, along with Mary Crowley and Peter Bowen, transported 89 Indians to Alcatraz on borrowed Marin County sail boats, under cover of darkness on November 20, 1969. They dubbed their flotilla “The Sausalito Indian Navy.”

On a wall, inside the New Industries Building, a dramatic cover of the December 1972 issue of Ramparts magazine depicts LaNada Boyer Means (now LaNada War Jack), Shoshone-Bannock. Spray painted next to her, in red letters, are the words,“Better Red than Dead.” That phrase might mean more to Americans who lived through the Cold War and the threat of nuclear apocalypse than to Millennials. Still, it has a real punch to this day.

Inside that issue of Ramparts there’s a powerful essay titled “Alcatraz Is Not an Island” by Richard Oakes, Mohawk, the male leader of the occupation. LaNada was the female leader.

There was a great deal of whimsey and playfulness during the nineteen-month reclamation of the island that was known as “The American Devil’s Island. The Indians created a “Department of Caucasian Affairs,” a play on the “Bureau of Indian Affairs,” which Native Americans often called “Boss Indians Around.” The exhibit on Alcatraz has nothing that’s really funny, though in one photo Hartmann capture a smiling young woman on the island; she seems confident and exuberant. In another photo, two Indians, a young man and a young woman, raise their fists above their heads in defiance of the authorities and the barbed wire fence that encloses them.

When John Ehrlichman, President Nixon’s right-hand man for domestic affairs, made a threatening phone call and said, “Get those Indians off the prison or we’ll throw them in jail, the occupiers had a good laugh. Vine Deloria, Jr., Standing Rock Sioux, and the author of Custer Died for Your Sins, called Ehrichman’s quip the “funniest line” he heard during the whole occupation.

Shortly before he was assassinated, JFK observed that Indians were “largely unknown to other Americans” and that they were “the least understood and most misunderstood Americans.” If the nation did not come to terms with the Indian past, JFK warned, “our treatment of the American Indian” would be “marked down for all time as a national disgrace.” The Red Power exhibit on Alcatraz, which lasts until the end of 2021, offers Americans of all races, creeds, and colors an opportunity to come to terms with the Indian past—and the Indian present.