Arresting Drug Dealers is not a “War on the Poor” 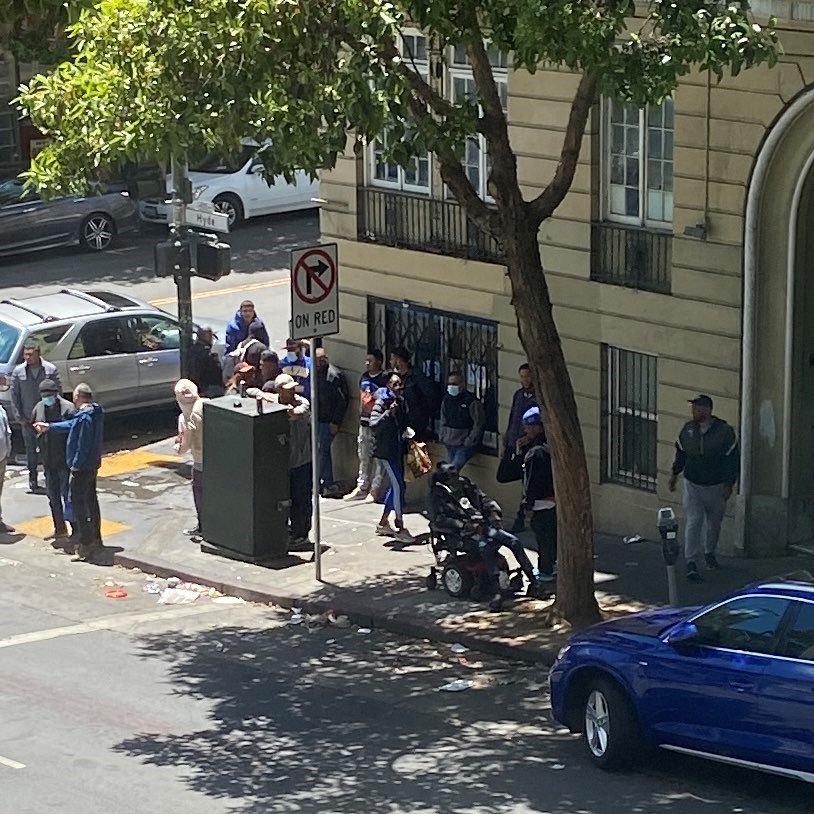 “Residents say they’ve felt trapped by what they call unsafe—and frankly frightening—conditions on the sidewalks outside the building. Isolation due to the pandemic was intensified by what they describe as open drug dealing, urine and defecation clogging up the walkways, and intoxicated or mentally ill people who have threatened and assaulted residents and staff.” SF Standard on 711 Eddy

The real “War on the Poor” in San Francisco is waged by drug dealers. Against the low-income, multi-racial residents, workers and small businesses in San Francisco’s Tenderloin neighborhood.

It got me thinking. Do those espousing such views, like San Francisco Public Defender Mano Raju and D5 Supervisor Dean Preston,  oppose arresting those selling lethal drugs? I asked Preston via a tweet whether he supported arresting drug dealers and got no response. Now that he represents the Tenderloin I assume he will explain his position to constituents. They deserve to know.

Raju (via a July 12 press release) accused Jenkins of reviving a “’War on Drugs’ designed as an attack on the poor and people of color that fueled criminalization and mass incarceration of vulnerable communities for decades.” Raju sees drug dealing not as an activity that spreads fear and violence in low-income neighborhoods but as a public health crisis.

I wonder if the affluent opponents of arresting drug dealers would feel that way if they lived at 711 Eddy. Or on any Tenderloin block beset by drug dealers. It might help them identify the true cause of what Raju sees as a “public health crisis:” healthy dealers selling deadly fentanyl to the addicted and the vulnerable.

Nearly all the Tenderloin residents I know are low-income. Most are people of color. Many feel like hostages in their own homes because they fear the illegal drug dealing outside. Last November over 200 residents led a “March for Safety” to City Hall. They are part of the shrinking working-class population that progressives claim to want to keep in San Francisco.

Tenderloin residents are pleading for the police to arrest or otherwise remove dealers—-how is it “progressive” to ignore their voices?

Hillary Ronen, a big Boudin backer, did not hesitate to call for police to deal with illegal activities at 24th and Mission. It’s like many San Francisco progressives are going back to the days when it was said people were liberal on crime until they got mugged.

But Ronen went further. She declared in an interview with the SF Standard that “I have a sneaking suspicion enforcement in the Tenderloin caused this problem.” In other words, Ronen is upset that the city’s largest low-income, working-class neighborhood, a community that is primarily Black, Latino, Arab-American and Asian-American, may no longer function as a drug dealer containment zone.

That’s quite an admission.

If legislation were before the Board of Supervisors authorizing the permanent conversion of  the Tenderloin into a drug dealer containment zone, it sounds like Ronen would support it.

A true progressive should strongly back measures to protect the working-class, multi-racial Tenderloin. You can’t say you care about stopping gentrification and then use non-gentrified neighborhoods as drug dealer containment zones.

Of course, Ronen only need visit the Tenderloin to learn that drug dealers continue to have free reign (the photo of dealers accompanying this article was taken last Thursday). The enforcement Ronen blames for problems in the Mission has not occurred.

Brooke Jenkins spent her second day in office touring the Tenderloin and meeting with a multi-racial group of Tenderloin families. She vowed to help protect their neighborhood. She has already shown more concern for Tenderloin families than Chesa Boudin did in his entire tenure.

Many progressives recognize that drug dealing is a war on poor and working-class communities. We know Raju, Preston,  and others critical of arresting dealers would never allow open dealing in front of their own homes. If they publicly offered the sidewalks in front of their homes to dealers I’m sure the police can convince Tenderloin sellers to open shop there.

But shifting dealers to affluent neighborhoods will never happen in San Francisco. Progressives like Ronen won’t allow it. Instead, progressives eager to keep dealers safely away from their own homeowner voting base push high-minded theories to keep dealers in low-income areas.

“You’re declaring a war on the poor if you rid the Tenderloin of dealers,” they say. What they really mean is “Keep those dealers in the poor neighborhoods. My homeowner constituents deserve better.”

I’m in my 43rd year working in the Tenderloin. I had the great fortune to learn about drug dealer containment zones from my longtime mentor and friend, the late Leroy Looper. Leroy, whose 1976 purchase of the Cadillac Hotel with wife Kathy sparked the Tenderloin’s revival, spent years selling drugs on the streets of Harlem. Leroy knew how much crime hurt low-income neighborhoods. He and Kathy opened the Cadillac as a half-way house, and Leroy was one of the few Black nonprofit housing leaders at the time.

Leroy explained to me forty years ago how the Tenderloin containment zone worked. The police say they cannot stop street crime in the Tenderloin because they lack officers.  But what’s really going on is the city refusing to allocate officers because it uses the Tenderloin to “contain” illegal activities from moving to other neighborhoods.

Looper said we could easily prove this by piling Tenderloin dealers into a van and bringing them to Union Street. Suddenly, the lack of officers used to justify Tenderloin street crime wouldn’t be a problem. SFPD would quickly remove the dealers no matter how many officers it took. And they would not be allowed to return. Leroy estimated the dealers would not last an hour on Union Street or in any other affluent neighborhood—the same is true today.

To combat the containment zone policy Leroy established the Tenderloin Crime Abatement Committee in 1984. He appointed me to lead a March Against Crime through the Tenderloin with Mayor Feinstein, Reverend Cecil Williams and others in 1985. Drug dealing was nowhere near the level it is today. But despite support for the neighborhood from mayors, SFPD leadership continued to treat the Tenderloin as a containment zone

I wish Leroy (who died in 2011) was here to respond to claims that stopping drug dealing is a “war on the poor.” He’d have some choice comments, you can be sure (you can read Leroy’s remarkable autobiography here).

Brooke Jenkins has not ended Tenderloin drug dealing in her first two weeks on the job. But she has already made it clear she is listening to the voices of the poor and those victimized by dealers. Her demand that dealers be held accountable for undermining the safety of the Tenderloin has been cheered.

Those unhappy with arresting drug dealers should support my preferred strategy: hot spot policing. As I described in the SF Examiner last December (“San Francisco Can Quickly End Tenderloin Drug Dealing”), hot spot policing uses visibility to deter drug dealing in hot spot areas. It’s proven success in New York City has not led to its use in San Francisco.

San Francisco has been unwilling to devote the police staffing required to prevent dealers from responding to police by moving a block or two away. Hot spot policing follows the dealers until they are far removed from hot spots—and they protect those areas until the coast is cleared longterm.

Police visibility deters open drug dealing. That’s why Tenderloin activists continue to urge the SFPD to provide more visible officers. It would be great if those concerned about drug dealer arrests endorsed this visibility and hot spot policing strategy—but I don’t expect that to happen.

When it became “progressive” to support open drug dealing in low-income communities of color?