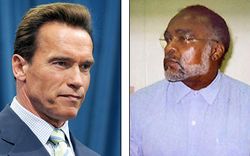 Last May, Governor Arnold Schwarzenegger changed the Department of Corrections to the Department of Corrections and Rehabilitation, a renaming many believed signaled a shift of the state from exclusively punishing criminals to a belief that with help, prisoners could turn their lives around. Last night, Schwarzenegger refused to stop the execution of a man who, while locked up, went from a gang leader to a prominent crusader against guns, drugs and violence. It’s hard to imagine a better example of rehabilitation than Tookie Williams, and the Governor’s failure to recognize this man’s achievements reveals that when Schwarzenegger claimed to believe in rehabilitation, he simply lied.

Williams’ quest for clemency represented the only time in recent California history when a criminal on Death Row’s identity as an individual superceded their identity as a murderer. Williams’ work to stop gang violence, as a role model for inner-city youth, and as a peacemaker in some of America’s most violent neighborhoods are what made his case so compelling. They’re also what makes the Governor’s decision to execute him such an outrage.

Californians have consistently shown a belief in rehabilitating prisoners, and the Governor took advantage of that belief when he tried to tell voters he felt the same way. Schwarzenegger used centrist rhetoric and a willingness to grant prisoners parole to convince people he’d be different than former Governor Gray Davis, who followed a notoriously harsh, ‘tough-on-crime’ agenda.

In fact, when he gave his State of the State address last January, Schwarzenegger emphasized reform of the horrific conditions at the state’s youth prisons and changing the Department of Corrections’ violent culture as priorities. He convinced a lot of people that he really believed in working to heal the communities across California destroyed by crime and incarceration, and would do so by making rehabilitation, not just punishment, a goal.

Williams presented the perfect opportunity to prove Schwarzenegger meant what he said. In fact, no other Governor will probably ever again have such a clear-cut case of proven rehabilitation. Williams went from starting one of the most feared and violent street gangs in California to someone who wrote children’s books pleading the state’s youth to not engage in crime. His life provided a shining example that rehabilitation of criminals could happen, that no matter what their past, people do change, and that sometimes, our worst criminals can end up having a positive effect on our world.

But yesterday, the Governor proved he simply didn’t care about Williams’ work, about the changes he made in people often ignored by everyone else, about the lives he probably saved, about the children whose futures he steered in a different direction, and about the gangs he likely stopped from forming.

Schwarzenegger also proved, as he has consistently since he took office, that any liberal rhetoric he uses amounts to little more than political calculation. The fact that the Governor has a right-wing agenda now seems indisputable. He proved it when he went after teachers during the special election, he proved it when he supported civilians arming themselves to stop immigrants from entering the country, and he proved it again yesterday when he refused to grant Williams clemency.

People arguing for the execution of Tookie Williams claimed his death would send a message to violent offenders – commit a crime, pay the price. But Williams’ death also sent another message to the state, one with potentially catastrophic results. The execution showed that, in the state’s eyes, it’s once a criminal, always a criminal, so don’t bother changing.

Schwarzenegger should be held responsible for sending this message and whatever affect it may have on people. In fact, he should be held doubly responsible because of his false claims to Californians that he believed in rehabilitation. Sadly, his decision likely involved little more than an attempt to shore up his conservative base after appointing a Democrat as his chief of staff. That a peacemaker’s life and the way thousands of criminals view their futures could come down to such petty political maneuvering represents a low point in recent California history.

Like so many issues that disproportionately affect African Americans, it may take rioting before the Governor understands the importance of Williams’ life to the people the former gang leader reached out to. To neighborhoods with large numbers of citizens incarcerated, rehabilitation while in prison represents a concrete means towards healing broken communities. Last night’s execution proves the state remains unwilling to facilitate this sort of healing.

While future historical discussion on Williams’ life may center on his guilt or innocence, the real legacy he leaves behind is his identity as perhaps the only member of California’s death row to be known more for his positive works than his checkered past. Governor Schwarzenegger had the opportunity to reward the former identity, and in doing so, tell the world he believed in humanity’s ability to come back from crime and hate to bring peace and compassion.

He failed to do so, and his failure was a moral one of grand proportions.