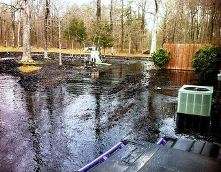 (Editor’s Note: To learn why the Keystone XL pipeline is also bad for Canada, see this editorial, “The Tar Sands Disaster”)

On Friday afternoon, Exxon’s Pegasus pipeline ruptured, spilling between 80,000 and 420,000 gallons of tar sands diluted bitumen in a suburban neighborhood in Mayflower, Arkansas. In 2010, a similar tar sands diluted bitumen spill into Michigan’s Kalamazoo River watershed demonstrated that diluted bitumen spills were significantly more challenging to clean up and damaging to the environment, particularly water bodies, than conventional crude. Moreover, tar sands diluted bitumen pipelines typically operate at significantly higher temperatures than conventional crude pipelines, increasing their risk of rupture due to external corrosion and other factors. While details regarding the cause of the rupture and the magnitude of the spill are still coming in, the Mayflower tar sands spill is yet another demonstration of the risks that tar sands pipelines pose to the communities and sensitive water resources they cross. At about a tenth of the full capacity of the Keystone XL tar sands pipelines, the 90,000 bpd Pegasus pipeline rupture offers us a small sample of the risk that tar sands pipelines pose to American communities.

Tar sands diluted bitumen is substantially different from the conventional crude historically moved on the U.S. pipeline system. It is a combination of heavier than water bitumen tar sands and light, toxic natural gas liquids or other petrochemical diluents. Together, this mix is called diluted bitumen, a substance that is fifty to seventy times thicker than conventional crudes like West Texas Intermediate (North America’s benchmark crude) and moves at higher pipeline temperatures. High temperature pipelines have been demonstrated to be at a substantially higher risk of rupture due to external corrosion – a study of a small network of high temperature pipelines in California showed they were 23 times as likely to rupture due to external corrosion than conventional pipelines.

The Pegasus tar sands pipeline rupture adds to growing evidence that tar sands poses additional risks to our nation’s pipelines and communities. Canadian diluted bitumen tar sands was first moved on the U.S. pipeline system in the late nineties – primarily on pipelines in the northern Midwest. While U.S. regulators don’t differentiate between tar sands pipelines and conventional crude pipelines, States with pipelines that have moved the largest volumes of tar sands diluted bitumen for the longest period of time – North Dakota, Wisconsin, Minnesota and Michigan – have spilled 3.6 times as much crude per pipeline mile as the national average. And until late last year, Exxon’s 90,000 bpd Pegasus pipeline was the only pipeline to move Canadian diluted from the Midwest to the Gulf Coast.

Spill responders in Arkansas are making every effort to keep the tar sands out of nearby Lake Conway, an important drinking water source and recreational area. It is important that they do, because nearly three years after the tar sands spill in Kalamazoo, Michigan, neither industry nor regulators have developed effective methods to contain tar sands spills in waterbodies. When diluted bitumen spills, the light natural gas liquid diluents evaporate, leaving the heavier that water bitumen to sink into the waterbody. Once it is under the water’s surface, conventional spill response methods are largely ineffective. After nearly three years and a billion dollars of cleanup activities in Kalamazoo, almost 40 miles of that river and a nearby lake are still contaminated.

The Mayflower tar sands spill is another warning of the potential costs of the tar sands industry’s reckless expansion plans. Nearly three years after the Kalamazoo river spill and tar sands pipeline companies are pushing ahead with major expansion plans without doing due diligence of the risks associated with tar sands diluted bitumen transport on pipelines.

This piece first appeared in commondreams.org