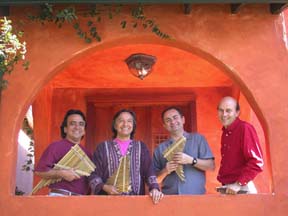 Many years ago I became a big fan of the Peruvian group, Los Colchakis, and later, the guitar duo Strunz and Farah. I may have found yet another group to move me in much the same way. Arauco is a unique acoustic music ensemble that specializes in Latin American folk music. Members of the group play pre-Columbian Andean instruments fusing them with their own songs and those of modern Latin American composers. Arauco sounds are modern yet firmly attach to the traditional sounds of the Americas. The group includes in its repertoire songs from the cultural heritage of the people of the Andes region including Bolivia Argentina Chile, Peru and Ecuador.

All of them play a wide range of traditional instruments; including wind instruments such as zampona (pan pipes in various sizes), kena (bambu flutes), rondador, ocarina, kenacho, string instruments such as guitar, charango, cuatro, tiple, and percussion like bombo leguero drums, caja redoblante, cajon, and chachas. The cajon is one of my favorite percussion instruments, basically a wooden box with a guitar string inside, attached to a jingle bell, and when played, sounds much like a snare and bass drum kit!

The name Arauco is an Indian name and a vast region in what is today the south of Chile and Argentina. It was and still is the homeland of the Mapuche Indians. The Mapuches have a rich culture and a long tradition of cultural pride and resistance. They were also fiery warriors and strategist who were never defeated by the Inca empire and resisted the Spanish conquistadors for many years.