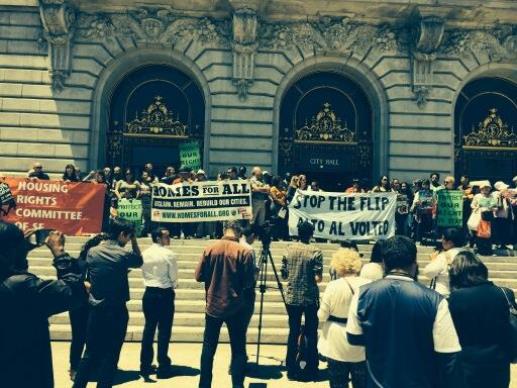 One of the last pieces of legislation that the late Supervisor Harvey Milk worked on was an anti-speculation tax aimed at addressing San Francisco’s housing crisis at the time. It is in his legacy that the Anti-Displacement Coalition, Tuesday, filed an anti-speculation tax ballot initiative to address today’s growing housing and affordability crisis greatly affecting the city’s long-time residents and working class.

With the signatures of Supervisors Eric Mar, John Avalos, David Campos, and Jane Kim the ballot initiative, which needed four signatures, was delivered to the Department of Elections, where the anti-speculation tax will be put up for vote to the citizens of San Francisco in November.

The legislation has been in the works for the past few months and grew from the strong community organizing that emerged from the tenant conventions that took place in neighborhoods across the city and in the citywide convention held at the Tenderloin Community School in February. The ballot initiative delivered was signed off with little hesitation, as members of Board of Supervisors have been increasingly supportive of tenant’s rights policies.

A rally was held before the delivery of the signed paperwork where members of the Anti-Displacement Coalition spoke. The Coalition includes the SF Tenants Union, Causa Justa/Just Cause, Eviction Defense Collaborative, Housing Rights Committee, and the Chinatown Community Development Center.

“All over the city, there were tenant conventions,” Maria Zamudio of Causa Justa said. “Tenants came together, spoke to each other, organized with each other, mobilized, and came together to draft this measure to solve one of the biggest issues of our housing crisis currently.”

The ballot initiative is aimed at addressing the city’s housing crisis, which has seen a growing loss of affordable and rent controlled housing in the city due to real estate speculation. Groups like the Anti-Eviction Mapping Project have released numerous studies highlighting the “Dirty Dozen” speculators in San Francisco, as well as the growing income inequality of the city. The anti-speculation tax will join the growing tenant’s rights movement across the state that has mobilized against Ellis Act abuse.

“We know that the speculation that is going on rampant in our city is increasing our housing cost,” Mar said. “We need to preserve our neighborhood character and diversity. We need to make sure San Francisco remains affordable.”

A March report compiled by the statewide tenant’s rights coalition Tenants Together and the Anti-Eviction Mapping Project found that 78% of Ellis Act evictions occurred within the first five years of ownership and 51% occurred within the first year. Proponents of the anti-speculation tax believe that creating a disincentive on short-term flipping would address the crisis brought about from real estate speculation.

“This measure is so important for so many reasons,” Kim said. “We know that part of the housing bubble that we’re seeing right now is because of speculators on the market.”

“There’s a small group of speculators that are buying up the vast of majority of the properties that are getting flipped in San Francisco. This ordinance is targeted at their greed,” she continued.

After the short rally, a small group of the remaining supporters marched into City Hall to deliver the signed ballot initiative.

The rally coincided with the release of the “Rise of the Renter Nation” report, which was produced by the Right to the City Alliance.

The four supervisors sponsoring the anti-speculation tax joined it with a “housing balance” initiative for November.  Mayor Lee has now responded to the  latter proposal by placing his own balance measure on the November ballot.

Lee’s measure, co-sponsored by Supervisor Breed and supported by Supervisors Wiener, Farrell, and Tang, “requires the creation of a funding strategy that will ensure over 50 percent of the 30,000 new and rehabilitated units by 2020 are within financial reach of low and middle income households.” Lee’s initiative also  allocates at least 33 percent of appropriations from the Housing Trust Fund to upgrading dilapidated Housing Authority units, and requires the city to ” identify new revenue sources to support housing for middle income households.”

Lee’s initiative clearly came in response to Supervisor Jane Kim’s competing measure that would limit market-rate  housing development should it exceed 70% of overall city housing production.  Critics of Kim’s plan argue that it includes no funding source to increase affordable housing, which likely explains why the mayor’s measure expressly requires that such a funding strategy be created.

Lee’s plan also tries to one-up the Supervisor’s measure by committing to fund over 50% affordable units rather than 30%.

Critics of Lee’s measure are likely to note that it lacks the “teeth” that makes Kim’s proposal enforceable. Backers of Kim’s plan believe a sanction is needed to ensure the city builds at least 30% affordable housing, though they also acknowledge that the city is currently at the 30% balance without such an enforcement mechanism.

So San Francisco will have an anti-speculation tax and two competing housing balance measures on the November ballot.

Today, tenant’s rights advocates head to Sacramento to push the State Assembly to move Senator Mark Leno’s Ellis Act reform bill, SB 1439, through the Housing and Community Development Committee. We will have a full report of the hearing and the vote in Thursday’s Beyond Chron.