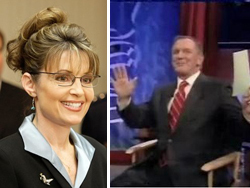 After refusing to join Barack Obama, John McCain and Joe Biden on the Sunday morning talk shows this week, Sarah Palin has agreed to her first media interview—with ABC’s Charlie Gibson. Gibson will fly to Alaska and spend two days with Palin to produce an exclusive, selectively edited human-interest story so we can learn more about the “hockey mom.” The McCain camp rewarded Gibson with this scoop after the anchor’s notorious moderating of a debate during the Democratic primaries—where he launched numerous attacks masquerading as questions against Obama (such as “Does Reverend Wright love America?”) ABC won’t be moderating any more debates for the general election, giving Gibson a perfect motive to feel shut out and “get back” at Obama—by puffing up Palin. Meanwhile, complaints of “liberal bias” have pressured MSNBC to demote Keith Olbermann—even though his show consistently has the network’s highest ratings. If we tolerate Fox News (and now ABC) for having a blatant conservative bias, what’s wrong with liberals having their own network?

Charlie Gibson said no topics are off-limits during his two-day interview, but let’s get real. ABC will start taping the interview on September 11—at the deployment ceremony of Sarah Palin’s eldest son, who is leaving for Iraq.

This gives Palin a perfect backdrop to showcase her family’s “gung-ho” patriotism—as the hockey mom watches her son go off to War. The McCain campaign has even admitted to the press that this interview is designed to “sell Palin well beyond the right — to a broad swath of women and independent voters.”

So if Palin doesn’t wear a flag lapel pin at her son’s ceremony, will Charlie Gibson question her patriotism by asking: “Do you believe in the American flag?” After all, they asked Barack Obama that question at the April 16th presidential debate in Philadelphia—which Gibson moderated.

What about Palin’s church—the right-wing Wasilla Assembly of God—which wants to “cure” homosexuals? An embarrassing answer won’t endear her to swing voters if Gibson asks her about it. Meanwhile, Obama was asked at the ABC debate: “Does Reverend Wright love America?”

How about Palin’s longtime affiliation with the Alaska Independence Party—a right-wing fringe group that wants Alaska to secede from the union? At the April 16th debate, Obama was asked about his friendship with William Ayers—an ex-60’s radical who was part of the Weather Underground.

The ABC News debate—which Gibson moderated with George Stephanopoulos—was strongly criticized for spending the first 60 minutes on inane character assassinations that parroted right-wing talking points against Barack Obama. By the end, as the studio audience started to rebel against this disgrace, Gibson nervously joked “the crowd is turning on me.”

The fact that Gibson now has an exclusive interview with Sarah Palin has not gone unnoticed. “Here’s hoping that a sense of fairness will lead Gibson to be comparably tough on Palin this week,” said columnist E.J. Dionne, as he recalled that infamous April 16th debate. “If he treats her more deferentially than he did Obama, we will know that McCain’s war on the media is working.”

However, Gibson now has the motivation to “get back” at Obama by treating Palin with kid gloves. ABC has been shut out of hosting any debates for the general election—while PBS, CBS and NBC will each have a shot. It has been speculated that the Obama camp insisted on keeping out ABC because of how they ran the April debate—and of course, who can blame them?

Now Gibson has been handed an exclusive “Barbara Walters-like” interview—following a celebrity that everyone wants to know more about for the next two days, and he can ask her any question he wants. The McCain campaign views this as an ideal opportunity to introduce Sarah Palin to “swing voters”—and who better to do that than someone who proved his mettle by repeating right-wing talking points against Obama?

Expect Gibson to not probe on tough questions about the issues. After all, this is a guy who—like John McCain— believes that someone who makes $200,000 a year is “middle class.” Sounds like another country-club Republican.

Moreover, why does Gibson have to fly all the way to Alaska to interview Sarah Palin? Why is the media extending her that courtesy? Can’t they interview her while she’s campaigning somewhere in the lower 48 states? Would they do the same to a Democratic politician from Hawaii—which Gibson’s colleague, Cokie Roberts, calls a “foreign and exotic” location?

Meanwhile, MSNBC has announced that—due to complaints of “liberal bias” by the McCain-Palin campaign—they were removing Keith Olbermann (whose Countdown is the network’s largest draw) from chairing the cable news channel’s election coverage.

First, I find it hard to suggest that a station that gives former Republican Congressman (and Newt Gingrich disciple) Joe Scarborough his own program as being the ideological opposite of Fox News. Second, you don’t see Obama filing a similar complaint against Fox—whose right-wing bias on every program is blatant and well documented.

But even if we concede that MSNBC has a “liberal bias”—and that having Olbermann chair their coverage gives Obama an advantage—what’s wrong with doing that when McCain gets favorable treatment at Fox News, and now ABC? Because as long as the right-wing bullies the media into giving them the kid-glove treatment, we’re not going to have “fair and balanced” campaign coverage.