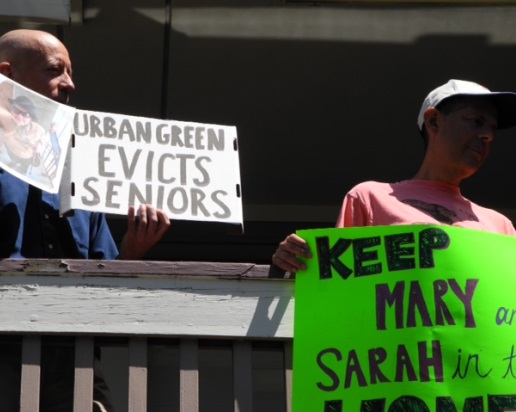 Yesterday, July 9, over 40 people came out for an action targeting the Marina offices of real estate speculators Urban Green to protest the Ellis Act evictions of 98-year-old Mary Elizabeth Phillips and teacher, and Phillips’s primary caretaker, Sarah Brandt. Urban Green Investments has been the target of numerous protest and demonstration over the past few months, and the action, organized by the eviction defense group Eviction Free San Francisco, promised to escalate the situation given the short time remaining for the tenants on Dolores Street.

The action comes after the defeat of State Ellis Act reform in the State Assembly in June, leaving many seniors like Mary Elizabeth Phillips, who testified in Sacramento, increasingly vulnerable to eviction and displacement. State reform, which had widespread support of tenant’s rights groups, Mayor Ed Lee, and the tech industry, faltered in the Assembly, as fellow Democrats turned their backs on San Francisco.

The defeat means that Ellis Act evictions will continue to happen, and as is unfolding right now, seniors and disabled will continue to be targeted by real estate speculators looking to evict tenants living in the increasingly scarce supply of rent controlled and affordable housing in the city.

Seniors and disabled have been some of the most vocal supporters of Ellis Act reform, but with speculators like Urban Green unrelenting to community demands to stop the evictions and politicians unable to pass needed legislation, activists are taking it in their own hands.

“Mary is 98-years-old and has nowhere to go if she is evicted, and would be separated from Sarah who is her primary caregiver,” Rebecca Gourevitch, tenant organizer with the Tenants Union and Eviction Free San Francisco, said. “We are here today to demand Urban Green rescind the eviction immediately.”

Eviction Free San Francisco has been one of the largest groups organizing direct actions to help stop evictions of tenants across the city. Yesterday’s action, targeted at Urban Green CEO David McCloskey, has been part of an ongoing effort to prevent many seniors and teachers from being evicted.

“What we can do is try to shame speculators and put these tenants in the public eye as much as possible, and that is what Eviction Free San Francisco has been doing,” Gourevitch said.

40 protestors gathered on the corner of Union and Gough and marched towards the office of Urban Green, carrying signs that said “Urban Green = Urban Greed” and “Protect Our Elders.” Demonstrators attempted to storm the offices, but found the doors locked. Instead, they gathered on the patio and held up their signature blue banner off the railing.

“What do we want?” Gourevitch called out through the bullhorn, as protesters responded, “Stop the eviction!”

The eviction of Mary Elizabeth Phillips has been a key organizing point, as protestors have continually highlighted that the eviction of seniors, many whom have nowhere else to go, is essentially a death sentence.

“In the real world, there are very real worries and very real stresses that have life or death ramifications on seniors and people with disabilities,” Tony Robles, organizer with Senior and Disability Action, said of the disconnect that real estate speculators have with the community.

Protestors demonstrated for close to 45 minutes, chanting and handing out flyers for a future action to prevent Phillips and Brandt from being evicted. A handful of people that made their way to the Marina were themselves being Ellis Act evicted, showing the strong sense of solidarity that has been established through actions organized by groups like Eviction Free San Francisco.

Benito Santiago, a senior and teacher, is currently being evicted from his home on Duboce Street. He’s been a constant presence at rallies and actions around evictions, with his drumbeats becoming the heartbeat of the movement.

“I feel that what’s happening with Mary is elder abuse,” he said. “I hope with all of this, we put the spotlight on McCloskey, and are able to have him see the human side and back down and rescind Mary and Sarah’s [eviction].”

Claudia Tejada, Patricia Kerman, and Theresa Flandrich, who are also all being evicted, attended the demonstration in solidarity. With the tremendous impacts that displacement brings, it also has united those struggling together.

“Every eviction is different, every situation is different,” Diego Deleo, an 80-year-old poet being evicted from his home in North Beach said. “It is money, but more than that, it is the emotional impact it has on everybody.”

Eviction Free San Francisco is planning a large rally to keep Phillips and Brandt in their homes as their Ellis Act eviction case unfolds and their date of eviction becomes eminent. The rally will be held in front of their home at 55 Dolores Street on Thursday, July 24, 5:30 PM.