Anti-Daly Signs Up in the Tenderloin – 24 Days Past Due 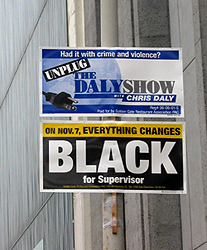 The election is long over, but the Golden Gate Restaurant Association (GGRA) has still not taken down two of its anti-Chris Daly signs on a lamppost at the corner of Golden Gate and Hyde. With Ranked Choice Voting, San Francisco voters were supposed to get a holiday season free of election propaganda, slick mailers and annoying billboards. But Rob Black and the GGRA, which attacked Daly over trash in the Tenderloin, appear oblivious to this. San Francisco law requires all campaign posters that are affixed on city-owned property to be taken down within ten days after an Election. It is now 34 days after the election, and the GGRA is now subject to criminal penalties (a fine of up to $500) or civil litigation. At the very least, the Department of Public Works should exercise its legal authority to take down the signs and charge GGRA for the costs. For a group that criticizes others for maintaining blight, the GGRA has some explaining to do.