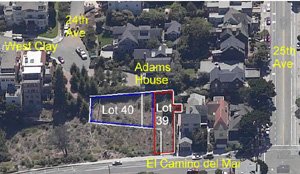 Last Wednesday the Budget & Finance Committee heard testimony regarding the ongoing scandal involving the proposed Ansel Adams Grove in the Seacliff neighborhood and adjacent to the Presidio. As reported last week, two dubious real estate speculators offered bids for Assessor’s Block 1334, Lots 39 and 40, and the San Francisco Public Utilities Commission (SFPUC), spearheaded by Susan Leal, is the focal point in a controversy centered around whether or not to develop land adjacent to a fragile ecosystem or to set aside the land in question as part of a larger vision to honor the world-renowned photographer and environmentalist, Ansel Adams.

Part of the controversy focuses on the SFPUC’s refusal to act in good faith regarding assessment of the lots when it continually denied the National Park Service (NPS) access to conduct an appraisal. An additional item of controversy involves a requirement the SFPUC invoked (and approved by the Board of Supervisors) that required that a nonprofit association had to have deposited $1-million for just the right to enter into talks to consider negotiation to purchase the lots as a set-aside for the creation of the Grove.

In the captioned Microsoft satellite photo above, Lots 39 and 40 are shown outlined in white while the proposed reconfiguration lot that would be sold is in red, and the proposed Grove parcel is shown in blue.

Gary Dowd, Director of the SFPUC’s Bureau of Commercial Land Management, spoke first and immediately lied about the cause of the destruction of the Billman house in 1995. Dowd claimed it was a sinkhole that caused the collapse when in fact it was negligence on the part of the Department of Public Works subcontractor that caused the rupture of the 100-year-old brick sewer which exacerbated the situation, as reported last week. Dowd noted that the SFPUC paid out around $22.6-million in claims as a result of the negligence. Dowd also addressed the $1-million deposit “to explore the opportunity to keep the property open space” but conveniently omitted the facts surrounding the controversy in that the SFPUC denied the NPS access to assess the property.

Sup. Chris Daly brought up the question regarding the noticing of the item and Sup. Fiona Ma (sitting on the Committee because regular members were unable to attend) pursued the matter, yet another part of the controversy in this story. For the Committee hearing, the item was originally calendared without a street address — 107 24th Avenue — and only with the Assessor’s Block and Lot Numbers. Sup. Ma also questioned whether or not the SFPUC might have received higher bids had the SFPUC noticed the street address in the sales notice. Dowd claimed that when the sales were noticed to hundreds of developers, the street address probably would have been included but couldn’t state for certain that such was the case.

When the hearing was opened for public comment, Peter Brastow, Founding Director of Nature in the City, spoke in favor of denying the sales and pushed for preserving the open space. Mr. Brastow also noted that his previous position had been with the NPS and his responsibility had been the oversight of the land adjacent to the proposed Grove. Mr. Brastow pointed out that some critics view the opposition to the sales as a NIMBY (not in my backyard) issue and countered that the neighbors would welcome visitors to the proposed Grove.

Mary Russo McAfee spoke next and pointed out the support the neighbors have received from people like Bill Meadows, President of the Wilderness Society, John Rizzo and Becky Evans of the San Francisco Chapter of the Sierra Club, among others.

Peter Winkelstein, who currently lives in the Ansel Adams house, spoke about the overall vision of tying in the house with the land in question and the larger open space previously managed by Mr. Brasso. Mr. Winkelstein also spoke about the fundraising effort that produced pledges for $450,000 and felt that the fundraising could not have gone further because the neighbors didn’t know how much money was really going to be needed.

Tom McAfee also addressed the fundraising effort and debunked misconceptions regarding that effort. He pointed out that the amount of money raised was achieved through very little effort, and in previous phone conversations with Mr. McAfee he noted that the pursuit of additional funding could not be accomplished without first knowing how much money needed to be raised. He also pointed to the SFPUC’s view of the sales as a “cash cow” then noted that former supervisor now Mayor Newsom’s and Sup. Aaron Peskin’s approval of the subdivision of the land into two separate properties was contingent upon the NPS being permitted to conduct it’s own appraisal, which the SFPUC has consistently blocked.

John Rizzo, speaking for the Sierra Club’s 800,000 nationwide members, was followed by applause after he detailed Ansel Adams’ life and involvement with the Club and urged the Committee to preserve the land.

Joan Gerardo, even though self-touting as a strong rate-payer advocate, nevertheless noted that preserving the land would fit all the acquisition criteria of the Open Space Fund and countered Rec & Parks’ claim that there’s no funding by pointing to the revenue bonds currently being pursued. Joan urged the Committee to find a way of leveraging those revenue bonds with the neighbors’ fundraising effort.

Several other speakers also called for the preservation of the land noting the significance of the life and accomplishments of Ansel Adams as well as the importance of preserving the land as open space.

Sup. Daly noted he was leaning toward approval of the sales even though he continues to be a staunch environmental advocate but didn’t feel the neighbors had performed fundraising in good faith. Sup. Daly then continued the item for one week to give him time to review previous testimony in that regard.

Beyond Chron has learned that there may be additional funding available to pursue preservation of the land and possibly the acquisition of both lots for the creation of Ansel Adams Grove. In a phone conversation with Tom McAfee, Mr. McAfee revealed that an interested environmental-based organization might already have the funding available for not only the purchase of the properties at their full value — $2.68-million — but to address the actual development of the Grove itself.