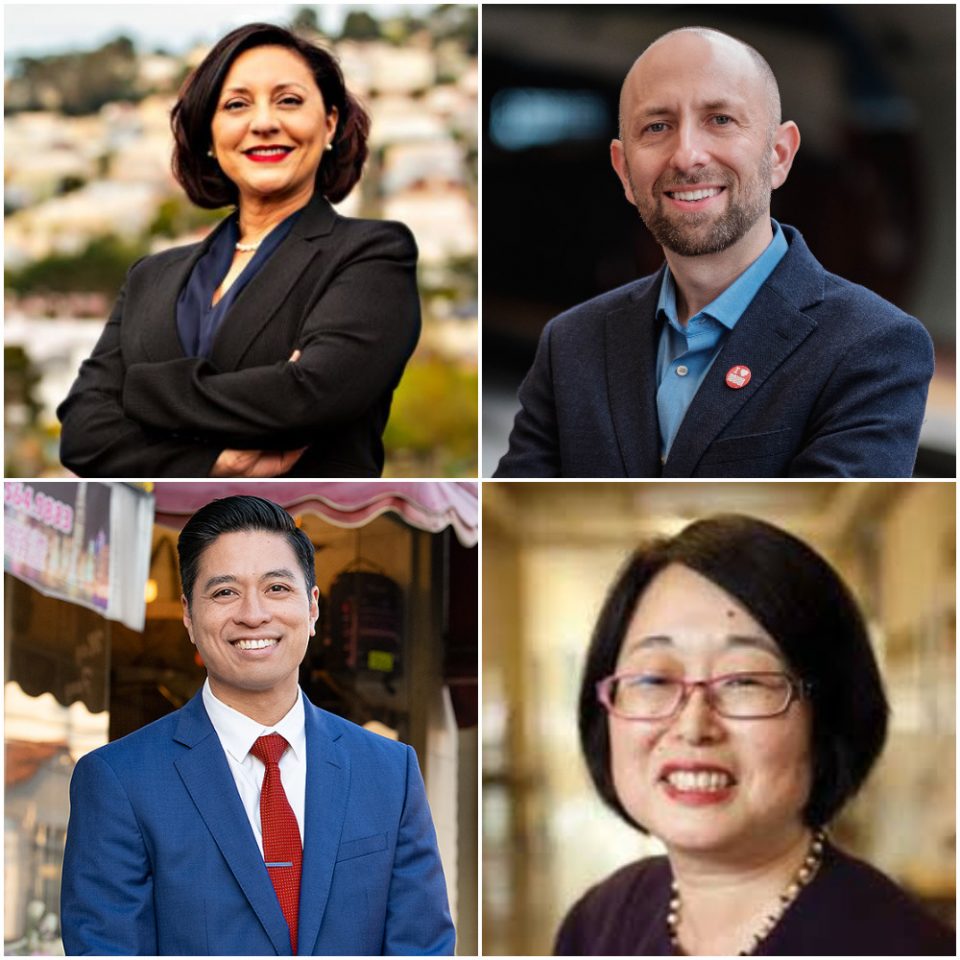 The most competitive San Francisco race this November is for D7 supervisor. This is consistent with its past races.

When San Francisco resumed district elections in 2000 Tony Hall defeated Mabel Teng in the December runoff by only 39 votes. Teng doubled Hall’s vote in November and would have won easily if the city had Ranked Choice Voting; but it didn’t.  With 15,000 fewer voters in December Tony Hall became the rare conservative elected in San Francisco.

After Hall left office in August 2004 and Sean Elsbernd was appointed to replace him, Elsbernd easily won election that November and in 2008. But in 2012 Norman Yee defeated F. X Crowley by only 132 votes (Joel Engardio finished fourth).

This November’s D7 race looks like another barnburner. Here’s why.

Myrna Melgar has a long history as a tenant and affordable housing activist. She would be the first Latina elected to the Board since district elections resumed.

Melgar should be the clear progressive choice against moderate Joel Engardio. But San Francisco politics is not that straightforward.

Melgar is a longtime ally of Mayor London Breed.  For some that puts her progressive loyalty in question. So while Melgar is endorsed by David Chiu, Sandra Fewer, Jane Kim, Aaron Peskin, and Gordon Mar, Hillary Ronen, Matt Haney, and Dean Preston are backing Deputy Public Defender Vilaska Nguyen.

Emily Murase, twice elected to the Board of Education (2010 and 2014), is also running. Murase only left the School Board because she missed the filing deadline for the November 2018 election.  The school board has proved to be the leading track for winning supervisor elections (incumbents Fewer, Haney and Yee, for example). Murase was the first Japanese-American elected to the School Board and the district is nearly 40% Asian-American.

Here’s my take (in alphabetical order) on their strengths and weaknesses and the state of the race.

Joel Engardio is running for D7 supervisor for the third straight election. His 2020 campaign targets the district’s 1970’s demographics of moderate to conservative white homeowners.  Not surprisingly given his message is tailored to the San Francisco of Dianne Feinstein and former Supervisor and State Senator Quentin Kopp (Feinstein defeated Kopp in the city’s 1979 mayoral election), both have endorsed Engardio.

Engardio’s billboards promote “Clean Streets, Less Crime and Better Services.” He wants to “Get the Basics Right.” These themes resonated when moderate to conservative whites dominated city politics.. Engardio is seeking a very different D7 political base than that which elected current incumbent Norman Yee.

First, he has greater name recognition from his prior campaigns. He has never actually stopped campaigning since losing in 2016. The value of name recognition is heightened this year due to the lack of door to door campaigning and voter focus on the presidential race. Name recognition will also help Engardio get second and third place votes from candidates whose ideology he may not share. That’s vital in a race that RCV will decide.

Second, Engardio has the most money. This reflects his backing by older homeowners and the real estate industry. With door to door volunteer efforts limited, mailings could play a greater role in educating voters.

Third, Engardio is a very personable and likeable guy. That helps win elections.

Engardio’s message depends on voters believing that a district supervisor has control over cleaning streets, crime or most city services. But those functions are performed by mayoral appointees. Most voters understand this. That’s why Engardio’s campaign message has not often brought victories in district supervisor races.

Norman Yee gave D7 voters a supervisor with a bigger vision and a citywide stage. Yee was also often pro-housing, a stance Engardio long promoted before shifting in 2020 toward largely ignoring housing policy in his campaign literature. When he does talk housing it is to identify as a champion of exclusionary single-family zoning.  Voters who want their supervisor to continue to play a large citywide role will select Melgar over Engardio.

Melgar has a long history fighting for progressive change. As the leader of St. Peter’s Housing Committee, Melgar fought to protect the city’s monolingual Spanish speaking tenants. At MOHCD she worked to expand affordable homeownership. After then-Supervisor Breed appointed Melgar to the Planning Commission she eventually became President. In that capacity I never heard a single progressive objection to any of her votes; she always backed tenants.

In a city with multiple Black mayors and a long history of Black supervisors, Melgar would be only the city’s second Latina supervisor and the first to secure her seat via election (Susan Leal was appointed by Frank Jordan in 1993 and was elected to a full term in 1994). This could help her in the increasingly ethnically diverse D7. The most recent 2016 American Community Survey found D7  to be 34% Asian, 52% White, 4% Black and 11% Latino. It’s likely even more racially diverse today.

Melgar’s ability to secure support from both progressives and moderates secured her the top endorsement of the San Francisco Democratic Party. She needs it, because she has two major obstacles to overcome in order to win this race.

First, she lacks name recognition in the district. This is in contrast to Engardio and Murase, both of whom have appeared on multiple D7 ballots. Increasing name recognition is harder when many voters are exclusively focused on the presidential race. And the pandemic prevents the door to door talks that candidates use to boost name recognition.

Second, Melgar is not flush with money. So she cannot make up for her lack of name recognition by flooding voters’ mailboxes (though she does have a volunteer force that saves mailing costs by dropping literature). Melgar also lost out to Nguyen on progressive endorsements like that of the San Francisco Tenants Union that her past history entitled her to get— slate cards increase name recognition.

Melgar would follow Norman Yee’s model of giving D7 high visibility on the Board. She is better positioned than Engardio demographically and ideologically to get the second and third place votes of her rivals. That could prove decisive in this highly competitive race.

If my friend David Ho were not involved with Emily Murase’s campaign I might not know she is running. She lacks major endorsements or much social media presence. If she has taken public positions on major city issues it has escaped me.

So why does Murase have a good chance to win?

What are her challenges? The D7 electorate is very different from 2014 so she may have a name recognition problem. Murase may also suffer from comparison to Yee. Yee became Board President and always had a citywide profile. Murase is not a player in San Francisco politics and has not done anything in this campaign to give D7 voters the notion she would give the district citywide clout.

It’s not clear which of the other candidates would send second place votes  to Murase. That could hurt her chances.

While I knew of Murase based on her school board tenure, I never even heard of Vilaska Nguyen prior to seeing his candidate announcement. Yet he has obtained the top SF Labor Council endorsement and a host of others from labor groups, including CNA, SEIU 1021, AFT 2121, United Educators of San Francisco, and Teamsters Joint Council 7.

What has Nguyen done as a Deputy Public Defender to win such labor support? Voters may wonder. But unions are clearly convinced he will back their interests at City Hall.

Nguyen is competing with Melgar for progressive support. And while she has a long record of progressive activism in the city, Nguyen’s progressive credibility comes from his years as a public defender and his progressive endorsements. Nguyen’s opposition to Supervisor Yee’s housing plan for the Balboa Reservoir could also get him votes from self-identified progressives who opposed Melgar’s support for the development (it passed the Board easily).

Few if any supervisor candidates have won with as little name recognition as Nguyen. D7’s Tony Hall in 2000 was little known in political circles but widely known as a wedding singer. Gerardo Sandoval was a public defender when he won in 2000’s D11 race but had the advantage of being part of a progressive district elections slate that elevated his profile.

A Nguyen victory requires a massive shift of second and third place votes from rival candidates, which is always possible. Chesa Boudin showed in the DA’s race that ranked choice voting does not always play out by ideology; Nguyen’s heavy presence on slate cards could get him those votes.

I cannot think of another district supervisor’s race ever where four candidates could win. All of the candidates should be priming their ranked choice voting strategies, as that will decide the winner.