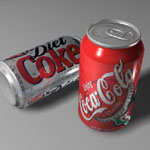 You are what you eat. It’s a popular saying with a lot of merit, given all the studies these days that show the hazards of eating the fast foods that have become the staple of the American “Ketchup is a vegetable” diet.

Now comes word that you may also be what you drink.

The American Heart Association’s journal Circulation reports that, according to the most recent study, people who consume regular or diet soft drinks may be equally at risk for heart disease. All these years folks thought they were making the healthier choice by going for that artificially sweetened, sugar-free drink, but it apparently makes no difference to their ticker.

Of course, studies prove all sorts of things, many of them contradicting each other. This was bad, now it’s okay. That caused higher cholesterol, now it only does it in conjunction with something else.

It’s hard to know what to believe. For the most part, Americans tune it all out. Faced with the often hysterical tone of mainstream media reports, people barely raise an eyebrow before going back to munching on greasy potato chips while pursuing their favorite pastime: Being a couch potato. They don’t want to know that their favorite junk food might be killing them.

The reality is that it is. It’s causing them to die sooner than they would if they had a healthier lifestyle . Or it’s making their lives miserable before it kills them.

I’m a vegan. I’ve been one for 27 years. No animal products at all. No dairy, cheese, meat, butter, etc. For me, it’s been the key to controlling my chronic asthma and to generally feeling better. It’s probably not for everyone. So I’m not looking for converts.

Still, it’s not news that drastic changes are needed in the American diet. Kids who grow up with fast foods and products with sugar as the first or second ingredient (especially if you add up all the different types of sweeteners on the label) are suffering from all sorts of ailments young people have never experienced before, such as Type 2 diabetes.

Our bodies are exactly like cars. Put bad fuel in a vehicle and it won’t be long before the tow truck comes to take it away to that metal scrap yard in the sky. Put bad food into a human body and the hospital stretcher or the undertaker’s bag won’t be far away.

It’s not just the junk people put in their bodies. It’s also the lack of exercise. With everybody driving everywhere and taking elevators instead of stairs, how often do people actually use those wonderful appendages below their hips? As Nancy Sinatra once sang, “These boots are made for walking.” It was good advice then, it’s crucial now.

Americans need to wake up and smell the herbal tea.