Another Shameful Moment in Our Country’s History 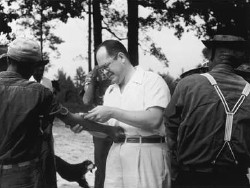 Most Americans have probably heard of the hideous Tuskegee syphilis experiment in which for 40 years, poor African American share croppers in Alabama were supposedly tested for the deadly venereal disease, but never told they had it nor given penicillin to cure it. The reason? Government scientists wanted to study the various stages of the disease. The program stopped after the Washington Star broke the story in 1972.

Now comes word that at the same time that our government was experimenting on black men in Tuskegee, it was intentionally infecting hundreds of male prisoners and female mental health patients in Guatemala with syphilis and gonorrhea to study whether penicillin was a preventative as well as a cure.

The experiment, which was done with the cooperation of the Guatemalan government, was uncovered by Susan Reverby, a women’s studies professor at Wellesley College in Massachusetts.

Secretary of State Hillary Clinton and Human Services Secretary Kathleen Sebelius, were quick to express our government’s regret for the experiment: “The sexually transmitted disease inoculation study conducted from 1946-1948 in Guatemala was clearly unethical. Although these events occurred more than 64 years ago, we are outraged that such reprehensible research could have occurred under the guise of public health. We deeply regret that it happened, and we apologize to all the individuals who were affected by such abhorrent research practices.”

It’s all well and good to apologize, but it’s too little, too late.

Tuskegee and Guatamala are merely the tip of an iceberg that is the unethical and deadly experimentation conducted by our government on military personnel, prisoners and civilians here and in other countries.

The extent of that experimentation will never be known. At a Senate hearing in 1977, Massachusetts Senator Ted Kennedy told members of the committee that “the records of (these human experimentation) were destroyed in January 1973, at the instruction of then CIA Director Richard Helms. In spite of persistent inquiries … no additional records or information were forthcoming.”

At that same hearing, it was revealed that at least 239 cities in this country (including San Francisco, Washington, D.C., and New York) had been sprayed with some sort of biological agent in order to test the military’s theories on how to use germ warfare. Though the agents were considered harmless by government scientists, the Senate heard testimony that their dispersal in the air sometimes had deadly consequences.

Kennedy said, “The Deputy Director of the CIA revealed that over 30 universities and institutions were involved in an “extensive testing and experimentation” program which included covert drug tests on unwitting citizens “at all social levels, high and low, native Americans and foreign.” One of the drugs was LSD.

Unrepentant, one government witness, Lt. Colonel George A. Carruth said at the time that the Pentagon might well revisit the idea of “additional tests.”

Another shameful moment in our country’s history.