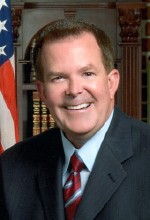 How do Republicans come out of the closet? Usually in the most embarrassing way possible. If they’re not tapping their feet in airport bathrooms, they’re wooing teenage pages or hiring hustlers with loose lips. At least their exits from the closet are entertaining.

California State Senator Roy Ashburn of Bakersfield’s trip into the light is no exception. A good ol’ family man with good ol’ American family values who consistently voted against the “gay agenda,” he was recently pulled over for driving erratically down the highway on his way home from a Sacramento gay bar. He even had a “companion” in the car with him, someone he reportedly met at said queer establishment.

Ashburn was arrested and charged with driving under the influence and operating a motor vehicle (a state-owned one) with an alcohol blood level that exceeded the .08% limit. Another right-winger who walks the straight and narrow by day and parties hard with the boys at night.

It sure makes for juicy headlines. And an immediate inclusion in what Pam Spaulding of the blog Pam’s House Blend dubbed the “Republican Sexual Hypocrites, 2010 Edition.”

True to the latest fashion, Ashburn did the public confession thing, joining a long list of politicians and celebrities (including our own San Francisco Mayor Gavin Newsom) who have taken to reciting their mea culpas to an appreciative TV audience.

“I am deeply sorry for my actions and offer no excuse for my poor judgment,” Ashburn said. “I accept complete responsibility for my conduct and am prepared to accept the consequences for what I did. I am also truly sorry for the impact this incident will have on those who support and trust me – my family, my constituents, my friends, and my colleagues in the Senate.” And blahblahblah.

Ashburn not only voted against gay issues over and over again (even opposing a California “Harvey Milk Day”), but he also hosted an anti-gay marriage rally in which he said, “And we must not go there.” Guess he wasn’t talking about gay bars.

He also wasn’t fooling anyone.

Christopher Cabaldon, the mayor of West Sacramento, says that he knew all about Ashburn. Cabaldon posted a message on Facebook saying, “It wouldn’t bother me so bad to see Roy Ashburn at Badlands (a gay bar in Sacramento) with a boy if he didn’t have such a bad voting record on gay rights.”

The Bakersfield Californian asked him twice whether he was a friend of Dorothy’s, but each time he denied it.

Ashburn is the kind of politician that I would gladly out. Why should I respect the privacy of a closeted politician who bashes gay rights and fights against honoring a great man such as Harvey Milk?

Sure, it’s still not a bed of roses to come out, especially outside of big bad cities such as San Francisco. But many of us (including Milk) did it three, four decades ago when it was truly heroic to do so.

Ashburn’s coming-out is anything but heroic.