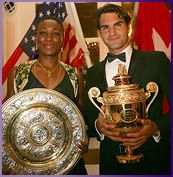 Apparently Centre Court, that verdant property in a very good neighborhood, has been subdivided. One half is Williamsville, the other called Federer Farm.

Acquiring his third straight Wimbledon championship yesterday, a Swiss millionaire named Roger Federer has a legitimate claim to sharing the turf with Venus and Serena Williams. Why not use the land as a farm? Every time he shows up there, Federer plows somebody under and sows the seeds of fear among his colleagues in the tennis business.

The plowee yesterday was an American lad, Andy Roddick, who was permitted to stick around for 101 minutes before Farmer Federer finished harvesting him, 6-2, 7-6 (7-2), 6-4. Federer had been making hay from the 14-minute mark, when the match essentially ended with the first break of Roddick’s serve. Roddick might have been better off exchanging his racket for a pitchfork.

”I’m a better player than I was two years ago and last year [losing a semifinal, then the final to Federer], but I have nothing to show for it,” said Roddick. ”It’s frustrating.”

But Federer is better, too — ”head and shoulders,” said Roddick. Especially on grass: 21 matches in a row at Wimbledon, 15 at other locations. Federer raises hell on his farm with anybody who trespasses. Roddick was a trespasser.

Federer was the squire and Roddick the scrambling lamb eventually getting shorn, just as No. 2 Lleyton Hewitt had been in the semifinals. Federer, constantly varying his tools, has so many ways to hit a ball in so many directions, with so many spins and speeds, that the best Roddick, No. 4, could hope for was to catch up with some of them. Far from enough, however. With 11 aces and 14 service winners, Federer made the balls seem as easy to deal with as home-grown peas zipping on the lines.

Roddick gave it a game and aggressive try throughout, but got passed more times than a Volkswagen bug on an expressway. When he actually jumped ahead, 3-1, in the second, everybody in the gathering of 13,802 knew that lead would last about as long as an asparagus crop in Antarctica. Federer simply won eight of the next nine points — six of them winners — and it was 3-3.

But it’s not just hitting the ball. He’s peerless at getting to it, always arriving in the right place effortlessly, making those 10-yard dashes from one corner to the other so that you hardly notice. You think he’s beaten by a brilliant shot — but abruptly he’s there, almost casually, perhaps chortling, ”Do you think the rain’ll hurt the rhubarb?”

Rain was all that could stop Federer yesterday, but only for 25 minutes at the juncture of the second and third sets when the glowering sky briefly dripped. Good for the crops, though.

As well as farming, Federer is going into the Wimbledon dynasty business. He’s approaching such icons as Bjorn Borg, five straight (1976-80); Pete Sampras, four straight (1997-2000) and three straight (1993-95); and has tied Fred Perry, three straight (1934-36). This was his fifth major singles win, a number reached at the same age, 23, as Sampras, who went on to the record 14. That’s a long way off, but if Federer stays healthy and motivated, it’s a thought. It doesn’t look as though he’ll lose title to the farm for a while.

And with Venus rejuvenated (perhaps inspiring Serena to reorganize her act), Williamsville may well continue in the family’s hands. It’s been there since 2000, except for Serena’s eviction last year.

Although smoothness counts, and Federer offers plenty of that, the ladies — Venus and Lindsay Davenport — stole the championship shows. Suspenseful drama always does.

Despite chasing off the trespasser, Federer had good words for him. ”This may have been my best match. It’s right up there with Hewitt at the US Open last year [Federer, 6-0, 7-6, 6-0]. But you don’t do it without the opponent pushing. Without a great opponent, there’s no match.”

As much as he loves his farm and her, Federer says he will not be bringing his cow, Juliette, to Centre Court. Juliette, presented to him by friends when he won his initial Wimbledon in 2003, prefers the grass of her Alpine meadow. That would probably be a more pleasant place than the Farm for Federer’s foes as well.

Bud Collins is a syndicated columnist for the Boston Globe. Beyond Chron is able to print his column via RSS, short for “Really Simple Syndication,” a format that allows writers and news services to send to Web sites, blogs or your desktop.