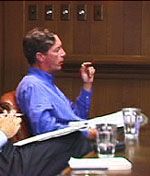 Enemies were in abundance in the first two years of our struggle at Trinity Plaza, but last week another one bit the dust. As reported in last week’s Bay Guardian, Ken Garcia is leaving the San Francisco Chronicle. A quick sidetrack here: the Chronicle posted a $67-million loss last year, and the Hearst family brought in hit man Frank Vega to bust up the unions (see Steve Zeltzer, “The Coming War At the San Francisco Chronicle,” Beyond Chron, January 3, 2005 for an in-depth analysis).

As reported, management and the unions reached an agreement in July whereby 110 members of Northern California Media Workers Guild would be offered early retirement, but the intent of this article is not to rehash Matthew Hirsch’s comprehensive analysis of the Chronicle’s management team backstabbing the unions.

No, this article is to express the sheer joy and ecstasy that another of our enemies is history!

The Trinity Plaza Tenants Association (TPTA) vanquished Angelo Sangiacomo, the Father of Rent Control; you already know that story. Then there was Cornell Fowler, who tried to sleaze his way to fame as part of Reputation LLC’s attempt to defeat us; Fowler is no longer with Reputation [or lack thereof]. I don’t even think the company is in business any more.

But one of the most vile, despicable, unethical, and unprofessional of our enemies was Ken Garcia. Though Garcia was paid by the Chronicle, we all know he worked for people like Warren Hellman of SFSOS notoriety. Indeed, Garcia and Hellman were ‘friends’; that is, if two disreputable ‘humans’ could have a trusting friendship. But Garcia was also Gavin Newsom’s hit man; over the past few years Newsom called on Garcia for several failed attempts to destroy Sup. Chris Daly’s credibility.

I have no doubt that Garcia penned some of SFSOS’ hate-mongering ‘literature’. It’s also been purported that Garcia was asked by Gavin Newsom to assist in Newsom’s despicable August 19, 2005 letter to the Board of Supervisors regarding the SOMA community’s victory on Rincon Hill; that was a Newsom-style right-wing attempt to discredit the honorable Sup. Daly, someone Garcia was constantly gunning for on behalf of Newsom, Wade Randlett, Hellman, the Hearsts, the Chamber of Commerce, SPUR, BOMA, and the like.

Additionally purported is that Newsom confidants Jesse Blout and Matt Franklin privately admitted “drafting” that notorious letter, but I can’t imagine Brain Blout and Brain Franklin having enough Combined Brain to pull off such a task without help, and adding Brain Cohen (that’s Michael, the Most Boring Public Speaker in the Milky Way Galaxy, and probably others) just would not have been enough — for want of a better word — ability — to accomplish the task. The letter in question definitely has Garcia’s writing style so he must have contributed at least a phone conversation and editorial comments.

But Garcia’s most disgusting display of right-wing extremism and fanaticism was exhibited in his March 29, 2004 article bashing Sup. Daly and calling Trinity Plaza blighted and shabby, and Garcia thought he could get away with such disgraceful writing and likewise avoid repercussions of his unconscionable actions. Well when he attacked the Defender of the Disenfranchised and our friend, Chris Daly, and when he called our homes shabby, Garcia gained enemies for life.

As you no doubt remember, TPTA and allies rallied on March 29, 2004, but we knew of Garcia’s impending malicious attack on the previous Saturday. I delivered a speech at that rally, but I had written a second (undelivered) speech in response to Garcia’s garbage. Well, as a fitting sendoff to Ken Garcia, here are the first three paragraphs of that undelivered speech:

“Those of you who know me know that I don’t dance around the issue: to me, if it smells like it, sounds like it, and looks like it, then I’m gonna call it the way I perceive it.

“We don’t need to open our windows at Trinity Plaza to catch the stench, and on Saturday we got wind of today’s column by Ken Garcia of the Chronicle. Garcia calls our neighborhood ‘blighted’: the only blighted area around our neighborhood comes from the stench of the cesspool at 5th and Mission; it’s the empty space between Garcia’s ears.

“To use the 2 words ‘journalistic integrity’ in the same sentence with the 2 words ‘Ken Garcia’ is like putting the cart before the donkey: it just doesn’t fit. And as I said, we knew this was coming, but it doesn’t make the stench smell any sweeter.”

Farewell and good riddance to Garcia. He will NOT be missed by the decent people of San Francisco.

That just leaves the low-ranked amateurish gossip columnists Phil Matier and Andrew Ross, and the guy who broke Clint Reilly’s ankle because Reilly disagreed with him, Phil Bronstein. I’d hate to be in Napa later this month when Bronstein swings golf clubs for a charity just so he can claim a deduction on his income tax return.