Another Bush Atrocity Comes to Light 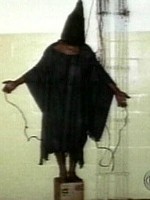 There’s no end to the atrocities committed by the Bush administration. It’s not outrageous enough that this administration gave us two unprovoked wars, illegal spying on American citizens and repeated lies about weapons of mass destruction that it knew didn’t exist.

Now comes word via the Washington Post that the Bushites authorized the use of the infamous torture technique known as waterboarding on Al-Qaeda suspects. Waterboarding has a history of being used during some of the world’s worst atrocities, including the Spanish Inquisition (a production of the Catholic Church) and the Khmer Rouge regime in Cambodia.

Waterboarding involves tying down a prisoner, covering his face with a cloth and pouring water over his mouth and nose to make him feel as if he is drowning. It is widely condemned by human rights groups.

The existence of secret memos from 2003 and 2004 from the White House to the CIA approving the use of waterboarding casts doubt on Secretary of State Condoleezza Rice’s testimony before Congress last month that the administration had reservations about this form of torture. Those reservations were never expressed in the presence of the CIA officials, the paper says.

Let’s face it. There’s no trusting anything that this administration says or does. Nothing. Americans have been lied to since Bush and his merry band of neocons first took office at the beginning of the new millennium. Not to sound like a conspiracy theorist, but we have never gotten the complete truth about 9/11 either. Why were members of bin Laden’s family whisked out of the country without being questioned by the FBI?

As much dirt as there has been on Bush and company, there’s probably that much more to be uncovered. Unfortunately, Bush will never be held accountable for any of it. He’s set to leave office without answering for his crimes. Illegal spying is a crime. Lying about weapons of mass destruction and then starting a war that has killed untold numbers of civilians in Iraq and over 4,000 American soldiers is a crime. At least in my books.

Because Nancy Pelosi took impeachment “off the table” when she assumed the position of House Speaker, Bush will walk free and leave office an elder statesman.

He may exit as the president with the lowest approval rating ever, but he will still have his socialized medical care (for the rest of his life, paid for by my tax dollars and yours), something he is against for the rest of us. He will have a library for his papers. He will receive a hefty pension.

Unlike the rest of us, he will never be a poor man.