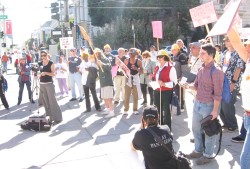 Arnold never looks good when he acts like a bully—picking on people less powerful than him. When he famously pledged to “kick nurses’ butts” in 2005, it was a PR disaster for the Terminator. Now, right after the worst budget stalemate in state history, Governor Schwarzenegger slashed over $500 million in programs affecting seniors and people with disabilities. One of these programs was a $347-a-year tax credit for low-income senior tenants—giving this group an effective tax increase from a Governor who refuses to raise taxes on millionaires and corporations. With a special budget session scheduled to reopen in Sacramento, a crowd of seniors gathered in San Francisco yesterday to demand re-instatement of these programs—with powerful stories from those who rely on them. Although activists are preoccupied with the upcoming election, yesterday’s rally was a good start to a planned statewide campaign.

“We want Arnold to know that we won’t take this war on seniors anymore,” said James Keys of Senior Action Network—which organized the rally. “How dare you balance the budget on the backs of seniors, renters and poor people?” Seniors chanted with slogans like: “Arnold, Arnold, Stop the Hate! Gives Us Back Our Rent Rebate!”

Besides cutting tax credits for low-income senior renters and homeowners (which totaled $191 million in savings), the Governor slashed $13 million from HIV/AIDS education, $12 million from the Discount Prescription Drug Program, and $13 million from the Department of Aging. He even cut the state’s Ombudsman Program which investigates elder abuse on behalf of nursing home residents and assisted living facilities—days after the feds issued a report condemning conditions in California’s nursing homes.

Speakers were on hand at the rally to talk about how much seniors are suffering in this economic climate. Colleen Rivecca of St. Anthony’s Dining Room said that one third of their clients who come in for a free meal are seniors. James Chionsini of Planning for Elders decried cuts to the state’s Adult Protective Services—although the agency reports getting twice as many referrals as they had last year.

Bill Kirkpatrick of New Leaf Outreach for Seniors denounced the $13 million cuts in HIV/AIDS education for seniors. “We are seniors,” he said, “and we still have sex! Ignorant budget cuts are not the answer. Education for seniors is empowerment.”

Others shared their story about losing a rent rebate of $347.50. “Living on SSI is hard,” said Chris Dodenhoff, an SRO tenant at the Elk Hotel and a member of the Central City SRO Collaborative. “After I pay my rent, my bills and buy food, there isn’t any money left over. The Renter’s Rebate is the one time a year I get to do something for myself. Most people in my neighborhood never get to treat themselves to something nice. Now with food prices soaring, the little money that I do have is stretched thinner and thinner.”

Supervisor Tom Ammiano—who is virtually certain to become San Francisco’s next State Assemblyman—pledged to bring the protesters’ message to Sacramento. “We will demand to the Governor no cuts for seniors,” he said. “These cuts are unacceptable! They should not even be on the table! Arnold gets to fill his Hummer full of gas every day, and that money should be going to us!”

The Governor is expected to schedule a special budget session to deal with the impending financial crisis in California—giving activists the opportunity to pledge a restoration of these devastating budget cuts. But if they don’t succeed the first time, they will be back to demand a full restoration until Schwarzenegger caves. As activist Hene Kelly told me at the rally, “the last thing Arnold wants to do is piss off seniors.”