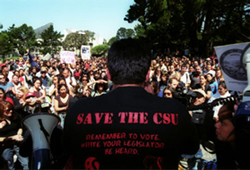 “The California budget deficit of nearly 15 billion should not fall onto the backs of the State Universities, UC system, and community colleges,” argue members of the San Francisco State University’s Labors Militant. “While the budget cuts force Universities to cut entire departments, decrease sections for large classes, and eliminate outreach programs in the community, more prisons continue to be built and paid for every year.”

“Due to the multi-million dollar reductions in the University’s 2003/04 budget and the proposed Governor’s budget for 2004/05, the colleges and other units within Academic Affairs have had to reduce their budgets by a total of $10.3 million.” stated John M. Gemello, Vice President of Academic Affairs.


Kinesiology studies sophomore, Andres Mendoza is one who will receive the harsher blow of the cuts. His program is first on the chopping black and he feels that “the government needs to get its priorities straight.” Mendoza thinks that we are putting a lot of money into war and not into education, “which is where it belongs. They’re raising all the gas prices, where is that money going?” Mendoza believes Governor, Arnold Schwarzenegger, sold students a falsified ad in his campaign to get elected. “In his campaign he was preaching all about education, but the aftermath is that is what’s first to go.”

Stacey Younge, Social Work studies major, is contemplating relocating schools because her program will also be eliminated. “I don’t want to do it, but I might have to.” She feels that it is ridiculous that an important program like social work is given no respect when it comes to making budget cuts.

Students’ unrest skyrocketed when on Tuesday, May 11, State
University Chancellor Charles Reed announced an agreement between the Governor and University of California President Robert Dynes that will solidify the cuts. Their six-year plan ensures stable funding for future budgets, but does not overrule the millions in cuts that have already ensued. Many students are angry about the agreement claiming that Reed simply “sold them out.”

In response to the deal, thousands of students at SFSU participated in a statewide walkout in protest of the cuts. Students marched through campus chanting , “Money for schools and education, Not for Corrigan’s administration” and “We’re fired up, won’t take it no more” We want money for schools, not for war.”

Tajila Weaver, Women’s studies senior, who helped orchestrate the walkout, is furious. “The budget cuts are an act of violence and we have every right to defend ourselves. Every human being has a right to be educated, no matter what their economic standing is.”

Weaver says that the cuts will affect students because there will be a lack of classes, lack of faculty, and fee increases. Students used to be able to graduate in for years; now it will be five and soon six or seven.

“The first thing I’m doing is speaking out to every single person I
see. Even if it’s in an elevator, I feel it is my job to just start
talking about it and informing people about the issues. I also make announcements in classes on what people can do.” Weaver also stated that she, along with many other students, is making phone calls to the governor, to express their disapproval of his plan.

She says that different students from various organizations on campus have come together to try and fight these cuts. In their weekly meetings, they brainstorm on what they want to see done and then implement their plan.

Dance Major Jenny Lucero-Rivera, also participated in the walkouts, but doesn’t necessarily agree they are the best way to fight the system. She says we have to come up with a more updated plan to get what we want. “You can’t use old ideologies in a new world; things changes, and so should the movements” she stated. Lucero-Rivera says that “the government will only start listening when their pocket hurts,” and suggested a statewide boycott of gasoline, rather than a walkout.

Although they may not all have a common solution, students at SFSU are aware of a common problem: the budget cuts to education have “got to go.”