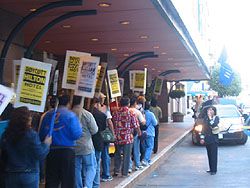 With the help of UNITE HERE! Local 2 and other supporters, hotel-workers gathered outside the Hilton at O’Farrell and Taylor, and the Mark Hopkins at California and Mason yesterday to encourage the public to boycott the aforementioned hotels, as well as 11 others around San Francisco.

The picketing occurred on the one-year anniversary of a strike held last year by the same workers demanding a decent contract, better health benefits, and wage increases. They picketed in order to remind the public that after being locked out of their jobs for 51 days as a result of the 2004 strike, a year later, 4,300 workers are still without the rights for which they asked.

Outside of the Hilton, UNITE HERE! Local 2 workers passed out fliers to people walking by the strike and took a more aggressive approach to those walking out of the hotel itself.

Volunteer Molly Moore told patrons, “shame on you,” as they exited the building. Most showed no interest in the picketers and some made faces or rolled their eyes at the trouble of getting through the crowd. Moore said that San Francisco is the only city left in the nation that has not given into hotel-workers as a result of a strike. “Something’s gotta give,” she said, shaking her head.

A number of participants cited power as being the main issue at stake. In addition to the health benefits, better wages, and contract negotiations, workers also want to decide whether or not they will join a union – a right the hotel does not afford them at this point in time.

“They will not agree to it because they know it will give us a lot of power,” said Moore.

Cars and busses honked in support of the picketers. With each honk, it seemed that the cries of the rally became louder, participants who yelled chants into megaphones on the street. “It was very hard [when they were locked out for 51 days] because we needed to put food on the table for our family,” said San Francisco resident Isaias Galvez. “I’m here to support my brothers and sisters.”