An Open Letter to Jerry Brown

by Sacramento Progressive Alliance on February 3, 2011 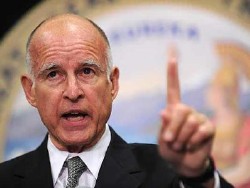 In your State of the State address, you requested ideas on where revenues might come from to avoid the painful budget cuts proposed. Here are our recommendations. It is clear that the California budget is in crisis, and the issues are clear in Governor Brown’s budget proposals. There are no quick nor easy solutions. We can not simply cut our way out of the crisis; budget cuts and lay offs make the recession worse.

School funding reveals the nature of crisis. In the last two years, the K-12 budget “solutions” have cut 4.6 billion dollars from the schools. We have larger classes and fewer teachers. School reform has stopped- except for the politicians’ speeches.

Anti tax radicals and Republicans oppose any tax increases. The state ‘solutions’ of the last three years depended upon receiving federal stimulus money. The stimulus monies are almost finished, and with the Republican winning control of Congress there will probably not be more funds.

The world wide economic crisis was created by U.S. finance capital and banking, mostly on Wall Street, i.e. Chase Banks, Bank of America, AIG, and others. Finance capital produced a $2 trillion bailout of the financial industry, the doubling of U.S. unemployment rate and the loss of 2 million manufacturing jobs.

More than 15 million people are out of work. At the national level, almost all of the projected deficit through 2020 will be the result of three factors: the Great recession, the tax cuts of the early 2000s under George W. Bush, and the hundreds of billions of dollars of war spending.

The economic stalemate in California has produced school funding cuts far beyond reasonable levels. At present, the state ranks 47th among all states in its per-pupil spending, spending $2,856 less per pupil than the national average.

In California we need to spend more state money to improve schools, to develop roads and infrastructure, and to create jobs. Those who are well educated are more employed and paying taxes while those with less education, those who leave school, are in a prolonged economic crisis. It is well documented that our schools and our universities are in a finance crisis.

(1) Enforce the current California law taxing the sales of goods by out of state companies ( such as Amazon) over the internet. Gain: $1.2 billion. There is already legislation to do this.

(2) Pass the $10.1 billion jobs package as proposed in the Assembly last year. This would pay off debts to local governments and keep teachers in classrooms to avoid massive layoffs. Pay for the Jobs package with a new oil severance tax. California is the only oil producing state in the country that imposes no taxes on the pumping of oil. The proposed tax was to be 6% of the sales price of oil. Alaska and Louisiana both charge 12.5%.

(3) Establish a public state bank such as the Bank of North Dakota. Initially move 25% of all state revenue, receipts and reserves into this bank and 25% of all PERS and STRS funds. Manage the bank as a public service. Over time, finance state borrowing from our own bank. Gain: 6% of the budget.

(4) Continue efforts to eliminate waste, fraud and abuse where it exists. There may be legitimate savings here. Employees, particularly managers should not be able to inflate pay in the year or two before retirement in order to receive an outsized pension benefit. While these cases are not the major source of financial stress of pension systems, abuses are frequently publicized and undermine confidence in the administration and fairness of public employee pensions.

(5) Repeal the 2009 and 2008 tax cuts for corporations passed to gain the extra Republican votes for the budget. Savings: $1 billion.

(6) As a consequence of the just passed federal tax reductions, including the reduction of taxes to the wealthiest taxpayers, Washington-based Citizens for Tax Justice estimate that California’s richest taxpayers will be saving about $14 billion annually on their federal taxes. The next wealthiest 4 percent, with an average income of $310,000, will save another $6.5 billion. State taxes should be increased on these two groups to secure this available 20.6 Billion dollars to fund the necessary jobs creation projects.

(7) Sell state bonds to gain funds for investment. At present, we pay bond holders a market rate. Rates are so low at present we should borrow and invest. To achieve a stimulus, we could sell many more bonds in particular to the public employees retirement system PERS and STRS.

Many more sources of revenue need to be developed. We have been thinking too small and looking in the wrong directions. Since the state can not go into debt, it will need to use tax policy to raise the funds necessary for public investments.

The state has also been targeting particular industries, notably the film industry with tax subsidies and local governments have been providing tax subsidies in the form of enterprise zones. Along with needed tax reform, these forms of subsidies (debt) should be reformed to focus on economic growth.

The legislature could also place on the ballot a “split roll” property tax initiative to deal with the present inequities of taxation. In virtually every county, commercial property is paying a far smaller share of the property tax since Proposition 13 passed in 1978.   Commercial property is able to exploit huge loopholes in the law to avoid reassessment upon change in ownership.

Alternative: We can follow the process of Ireland and Greece and dramatically cut services and raise taxes and impoverish the economy. Then, since the state is poorer and has less income you will need to raise more taxes and cut more services all in an effort to protect the excessive profits of bankers and bond holders.

California can continue the current process of cuts and reductions. The fiscal crises of the states – all the states- has caused major cut backs and retrenchment and made the economic crisis approach a depression.

The state cut backs are greater than the federal stimulus producing a prolonging of the crisis for working people. Continuing on the present direction produces obscene profits for billionaires along with growing poverty and hardships for the majority.

In Conclusion: Providing you with these sources reveals that “another way is possible.” We refuse to accept the severe cuts in social services, education, police and fire protection, and health care among others. Relying upon budget cuts to “balance” the budget means leaving in place the many current corporate subsidies for the well off while producing more unemployment and hardship for the majority.

Please use your leadership position to produce a humane budget this year. Then, if you do, we can work together to pass the proposed revenue initiatives in the June election.