An Era of Presidential “Meltdowns” 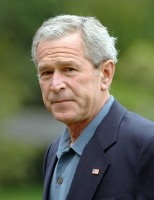 Two long-running grudge matches are about to end: the Bush presidency vs. 70% of the country, and the two national campaigners ready to replace whoever has been in charge — or not — of our government. Dismal Bush approval numbers reinforce both the president’s rigid loyalty to a failed ideology and how much he squandered since ’04: “I earned capital in the campaign, political capital,” Bush quipped, “and now I intend to spend it.”

Paralleling the debt-defying national buying spree of late, Bush’s government has not only spent billions but gotten so little in return: Iraq is endless, Afghanistan is worsening, our deficit is exploding, our national debt breaking records, and grocery prices soar along with job losses. The McCain campaign rightly treats Bush as invisible — negative returns on lost “capital” doom not just Wall Street banks but a presidential legacy and the Republican Party brand. Obama-McCain aside, Democratic gains from GOP failures will change Congress for a generation. President Bush is like the disgraced investment bank CEO, whose bad behavior has tarnished the entire “government” industry — and voters are responding.

And yet, let us not blame everything, including the economic meltdown on one man or one administration, however tempting or compelling the evidence. Some say we have a systemic leadership problem, that modern challenges are simply too complicated, in effect testing our Constitutional notions. Yet a more pertinent, corollary theory better fits the facts: American presidential leadership has been wholly incompetent over decades, not ready for prime time world leadership.

For most voters, isn’t the big question today how much presidential incompetence, negligence, even corruption, can a great nation endure without falling it on itself? Shaken badly this Fall, we hear from economists how vulnerable America is to drastic shifts, jeopardizing our world leadership. When do we start linking economic meltdowns to wider leadership meltdowns, without party affiliation, that produced them? When do we face the unpleasant thesis we’ve been living through a variety of presidential meltdowns over years, for which Mr. Bush is simply the most latest, most conspicuous failure?

Like the Marines, this republic desperately needs a few good men and women at the top, probably dozens to restore our depleted and demoralized federal government. True, this administration has greatly succeeded in getting “government off our backs” but look at the costs in credit, mortgage, stock, and banking losses? We are finally in this election coming to grips with treating government as the enemy, even perhaps recognizing really bad presidents cause really bad problems.

The unhappy, rarely tabulated scorecard of presidents since the last economic disaster, the Great Depression, is not reassuring: at the risk of being non-partisan, ask yourself how many great presidents since FDR will impress historians in 50 years as visionary, dynamic leaders who confronted the pressing issues of their day? Most of us live under the myth that we’ve had competent leadership. W. is less the exception than the rule.

No problem defining the problems

Both candidates talk the same talk, however different their walks. We have considerable awareness of the problems but have lacked truly inspired, skillful leadership, Republican or Democratic, that could transcend partisan immobility. Gridlock is not inevitable and more disasters will not just knick our civilization but degrade it dramatically. There is, finally, no divine guarantee this nation automatically thrives just because it asserts “American exceptionalism.” A country’s rapid decline may become its most “exceptional” quality.

In short, the failure to define systemic solutions is no longer an option, and we must begin by recognizing nearly all the leaders, for varying reasons, squandering political capital, thus the national wealth. We must resuscitate good government, even paying reasonable taxes, to restore America and the American dream for more than the top 20%. To the degree the government represents the country and taxes are the life-blood of the government, we must talk about the rough equivalence of the quality of our government with the quality of our lives — and the quality of the future.

If our democracy is to be made whole, we must find ways to return quality to government and government to the sovereignty to the people — and that, paradoxically, begins by returning greatness to the White House. Great nations cannot long suffer a train of mediocre leaders who cannot transcend their own parties or mindsets when problems are larger than both.