An Attempt to Get Answers Regarding The Governor’s Education Budget 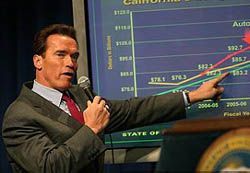 (Ed Note: This piece provides an illuminating glimpse into the Schwarzenegger Administration, and while written by a Berkeley resident is equally relevant to San Francisco. It first appeared in the Berkeley Daily Planet)

As a member of the Berkeley Unified School District community, I recently received a letter from Superintendent Michele Lawrence explaining the situation with teacher contract negotiations, facts about BUSD’s financial situation, and the proposed state budget as it relates to education. We were asked to contact the governor’s office to express our feelings about the proposed budget, so I did.

I called the number provided (916.445.2841), chose “hotline topic” (5), waited for a while, then was connected to a real person. Regina was obviously less than thrilled to be speaking with someone criticizing the budget proposal. We spoke for a few minutes as I tried to cover the topics raised in the Superintendent’s letter, and her replies were mostly limited to a couple of stock phrases, regardless of my questions and then responses to her repeated phrases. It basically ran something like this.