An Affordable Studio, A View of the City, and Your First Private Kitchen in Years 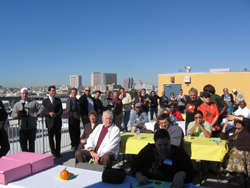 The Galvin Apartments opened this month with 56 brand-new large studio apartments at $561-a-month, in contrast to the $600-plus rents that SRO tenants normally pay for a hotel room. Joe Cassidy, the developer who built this project, treated these apartments as if he was going to live there himself. Bowers’ apartment, for example, has a stunning view of the Bay Bridge. Each private bathroom has panoramic quiet fans that are normally only available in elite condominium units. The kitchen microwaves have extract fans to pick up the fumes. And the building has the same carpets and marble finishings as
The Palms – a condominium project that Cassidy built for market-rate housing.

“This is a process that began in 2001,” said Randy Shaw, executive director of the Tenderloin Housing Clinic. “It was motivated to help SRO tenants get into apartments. These people were often working full-time jobs, but could never afford to get out of the SRO’s – because they couldn’t afford market rents, and the inclusionary housing law was insufficient.”

In 2001, Cassidy approached Shaw with a proposal – he already had a permit to build 172 luxury units of live-work lofts with no affordability requirement, but the dot-com bust had made it unfeasible. So instead, he wanted to build 300 condominiums subject to the City’s inclusionary housing law. If the City allowed him to do so, he would build off-site 56 units of affordable studio apartments for low-income tenants who currently live in SRO’s. When they proposed this project to Supervisor Chris Daly, he “jumped at this opportunity.”

Under the City’s Inclusionary Housing Ordinance (authored by then-Supervisor Mark Leno), housing developers must offer a certain percentage of the on-site units to residents at 60% of area median income. The problem is – that’s not low enough to give SRO tenants a ladder to apartment-style housing. But if the developer could build the affordable units off-site, the units could be built and rented at 35% of area median income. “If we had simply followed the regular model,” explained Shaw, “the so-called ‘affordable’ studios would be renting at $925-a-month.”

“It’s so great to see this theoretical off-site option actually work in the real world,” said Assemblyman Mark Leno, who attended the ceremony. “This project helps SRO tenants move on to improve their lives.”

But the effort to get this passed wasn’t easy. Some accused it as a “giveaway” to developers, and even questioned if requiring the affordable units to be built off-site would ever materialize – never mind that the alternative would be no affordable units at all. “We had more public hearings on this project than anything else I have ever worked on,” said Shaw, “and Chris Daly got more criticism from the Bay Guardian about this anything else. But I admire Chris Daly for sticking to this plan – because he is a hero to the SRO tenants in our community.”

“Those were rough hearings,” acknowledged Daly. “And they were divisive — by race and by class. I’d like to thank the SRO tenants who showed up time and time again to speak up for this project. Unfortunately, these tensions will continue until we provide true affordable housing for everyone. Fifty-six units is only a small step for people who deserve a decent and dignified place to live that they can call home.”

“Today is a great day,” said new resident Bob Bowers, who was profiled in the October 17th issue of Beyond Chron. “Everyone here is so full of life. I’d like to take a moment to think about all the people who are out on the streets right now who don’t yet have this chance to move in. I hope that their opportunity will come soon.”

That’s the hope. Speakers at the event were hopeful that the Mayor, the Board of Supervisors will take notice of this project – and replicate it elsewhere. “This project is a model,” said Shaw, “and it can be done again if the Builders, the City Planners and the Mayor can work together to create new affordable housing.”

“This building represents hope,” said Sean Keigran of the Residential Builders Association (RBA). “Hope that this formula can be repeated, and that it won’t be a one-hit wonder. Today should serve as a model of what can be achieved. This project wouldn’t have been possible without divergent interests coming together – the Tenderloin Housing Clinic, the RBA, Joe Cassidy and Chris Daly. From a hypothetical model that had its critics – to real change.”

Sister Bernie Galvin, who the building has been named after, was on hand to attend the Ceremony. As head of Religious Witness for Homeless People, Galvin has dedicated her life to fighting for the downtrodden. In the 1960’s, she organized sugar cane workers in Louisiana – and soon became a troublemaker for demanding that the schools be racially integrated. Today, she is a highly respected homeless rights activist in San Francisco and has fought to preserve the Presidio for low-income housing – among other struggles.

“I am deeply touched by this honor for an issue that is so near and dear to my heart,” said Galvin. “Safe, decent, affordable housing is a sacred right for every person. Home is one’s own place to come to. A place of refuge and security. A place to enjoy the privacy that we all love and deserve. Home is where we can create community with other tenants. Home is a place where dreams are made, and where tomorrow’s memories are created and cherished.”

The neighborhood was ready to welcome the new residents of the Galvin Apartments. Harold Hoogasian, who owns Hoogasian Flowers on Seventh Street, announced that he will deliver a bouquet of flowers to every tenant who moves in – along with a gift certificate to his store. “I did it to be a good neighbor,” he said. “It’s a beautiful day, a beautiful project, and it will fit into our community really well.”