by Alison Stevens Rodrigues on November 23, 2005 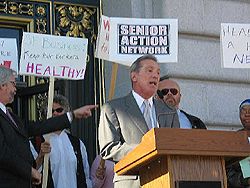 There was nothing common about legislation Supervisor Tom Ammiano introduced to the press yesterday afternoon at City Hall – a common place for making policy. Called the Worker Healthcare Security Act, it is his answer to San Francisco’s growing healthcare crisis.

As is evident from the nearly 70 percent of voters who supported Proposition 72, and the estimated 38,000 city workers who live each day without health insurance, reform is needed, said Ammiano. This Act would require San Francisco businesses with 20 or more workers to provide healthcare for those employees that work 80 hours per month for at least six months.


Tomas Lee, legislative aid to Ammiano, told Beyond Chron that those responsible employers, who long have provided health benefits, are now being faced with competitive pressure from other businesses that do not follow that standard.

Wal-Mart, for example, cuts expenditures by refusing health care benefits to the majority of its workers. According to the company’s own Web site, walmartfacts.com, Wal-Mart provides health benefits to approximately 620,000, or 48 percent, of its 1.3 million US associates.

Such employers are engaging in unfair competition and are encouraging a “race to the bottom,” where, in order to stay competitive, employers abandon their commitment to providing healthcare, thereby forcing workers to seek uncompensated care, Lee said.

“Uninsured employees have no other resources but to use public hospitals and community clinics thereby exacerbating the stress placed on an already over burdened public health system,” reads a press release from his office. “Taxpayers end up subsidizing the health care costs for employers who won’t pay their fare share.”

In fact, according to the release, the Department of Public Health estimates that as much as $24 million in public monies is spent on uncollectible accounts of employed, medically-uninsured patients.

Taxpayers and government can not continue to bear the burden that employers should be sustaining, said Supervisor Chris Daly, with Supervisor Sophie Maxwell adding that neither housing nor health care should be market driven.

Indeed, no one should have to choose between their rent and their health, said Ammiano. Nor should they have to choose between education and healthcare, contended Mehera Reiter, of Young Workers United. Reiter told how a friend of hers didn’t have health coverage and had to forego school in order to get his wisdom teeth removed.

The young worker added that, in addition to her role as a student at City College, she also holds two jobs, neither of which she receives benefits for.

“[Ammiano’s legislation] will get us one step closer to universal health care,” she said.

Critics of the Act insist that it would take us two steps back. According to a press release from the California Restaurant Association, Mike Flynn, director of legislative affairs for the Employment Policies Institute, said “His proposal would slap businesses with staggering costs and lead to tremendous job loss among the city’s least skilled workers.”

But Ammiano said that in his experience, those businesses that are supplying healthcare are thriving. They have a stronger workforce and succeed in the city, he said.

To assess whether the legislation is desirable and necessary, a seven member task force, will be appointed by the Board of Supervisors. They will review the feasibility of charging employers a fee for health care, evaluate creating a fee to fund enforcement of the Act, and report on the relationship between those uncompensated care provided by non-profit hospitals and the absence of such health care.

If it passes, the Worker Healthcare Security Act truly would be a landmark piece of legislation, said Bruce Livingston, because it would mandate that employees provide health benefits.

“It would ensure that they do the right thing,” Livingston said.