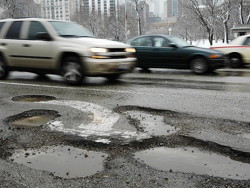 If you’ve traveled by car anytime in the past year, there’s a good chance that you noticed an array of potholes, lumps, and bumps in your local street or highway. In fact, crumbling roadways may have very well cost you a tire or harmed your vehicle’s suspension. While you might have dismissed poor pavement or excessive potholes as merely annoying, the state of America’s roadways in fact surpasses the level of mere annoyance and has become increasingly dangerous. In recent reports, the American Society of Civil Engineers graded the United States on the state of its infrastructure. This letter grade encompassed infrastructure elements ranging from bridges to freeways to state and local roads.

The final letter grade? Our infrastructure received, overall, a D. From tragic bridgeway accidents to, more commonly, poor roadways causing damage to vehicles, the state of America’s infrastructure is slowly beginning to cost citizens more and more. Whether or not your car insurance policy reflects the probability that poor upkeep of highways and streets could be harming your vehicle, chances are that the small bumps, jolts, and scrapes that the state of our infrastructure has cost your car are slowly adding up. The following infographic examines the way that our structural integrity may be having a serious effect on the state of your car.

This piece was first published at Carinsurance.org.