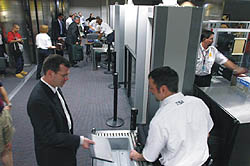 Remember when George W. Bush said that people hate the United States because they hate freedom? Well, after traveling internationally this week the opposite appears true: even travelers from pro-western governments view our nation’s airline security procedures as unnecessarily repressive and illogical. Consider: hand lotion that was carried in a purse from San Francisco to Argentina to Uruguay and back to Argentina was suddenly deemed a security hazard while boarding a flight back to the States. But the Transportation Security Administration (TSA) said that such lotion could be carried on a plane to America if enclosed in a Ziploc bag.

American travelers have become accustomed to the removal of shoes, disposing of water bottles, and other so-called anti-terrorism measures now associated with domestic flights. But passengers on flights entering America from abroad encounter greater obstacles, some of which curtail personal freedoms without impacting terrorism.

On a flight this week from Argentina, I encountered all of the customary security procedures. But as myself and other passengers handed in our boarding passes at the gate, and proceeded to embark on the standard walk through the tunnel to get on the plane, we encountered something that aroused great anger among us.

Despite having already passed through the metal detectors, and having been through multiple checkpoints requiring the examination of passports and travel documents, as we were about to enter the tunnel there was as an entirely new inspection line. This line involved the TSA’s search of our carry-on bags, a second round of questioning about whether anyone had given us something to carry etc, and the seizure of water bottles and other fluids purchased after passing through the metal detector.

In other words, the TSA felt the need to inspect carry on bags after they had already been x-rayed, and potentially personally inspected, at the metal detector site.

Since the passengers assumed that they could purchase water bottles and other fluids after leaving the metal detector—the practice for American domestic flights—we were taken by surprise by demands to dispose of such items right before we got on the plane. The only “logic” for such practice would be if the airplane stores were selling products that facilitated terrorism—if so, then the TSA should prevent such sales rather than deceiving consumers into buying products they must then abandon.

My fellow passengers were irate about this late-stage demand to abandon all fluids. A man from Calgary, Canada said “this is America, what do you expect”? An Australian responded to complaints by saying, “The United States has brought this on itself.”

I spoke to a Canadian whose family lives in Buenos Aires and has visited them annually for over thirty years. He told me that since 9/11, he makes sure never to take a flight to Argentina that includes an American stopover.

It is no wonder Argentine tourism to the United States has declined by 67% since 2001.

As pointless as the above requirements were, my wife’s experience with the hand lotion shows that many of these Bush-imposed regulations are not even designed to deter terrorism.

How can it be that hand lotion was considered “safe” in five prior airplane flights in Argentina and Uruguay but became a hazard on a trip to the US? And if hand lotion is hazardous, how does enclosing it in a Ziploc bag make it immune from use by terrorists?

Does the TSA believe that terrorists are unable to open Ziploc bags? Or is this one of the many petty infringements the United States government imposes to send a message of strength and authority to those seeking to enter its land?

The Bush Administration’s approach to airline security, likes its failures regarding Iraq, immigration, global warming, trade policy etc, has increased dislike for the United States across the globe. While many Americans appear to support any airport security measure deemed “anti-terrorist,” the rest of the world is not so easily fooled.