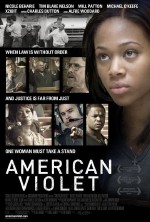 Hearne, Texas waitress Regina Kelly reasonably believed a better future beginning with junior college awaited her. A November 2, 2000 narcotics task force drug raid gave Kelly a far different future of fighting false drug crime charges. The ACLU aided the waitress and 26 other black low-income housing residents arrested in the raid in suing powerful Hearne D.A. John Paschall. That fight for innocence was adapted by director Roy Disney for the recent film “American Violet.” Kelly talked to Beyond Chron about some of the issues raised by the film …

Beyond Chron (BC): What are your feelings regarding Disney’s decision to not identify Hearne, Texas as the setting for the film?

Regina Kelly (RK): I’m satisfied with this decision. If people really care about this story or these issues, they will do the work to find out the real deal. It was a decision made to protect some of the people in the story. Although the film is based on my experiences, some of it is made up for “Hollywood.”

BC: Social conservatives tout small towns as friendlier and more socially supportive places than big cities. For our readers unfamiliar with small town social dynamics, how much of that conservative romanticism is true especially in light of your long legal struggle?

RK: The idea that it’s better to live in small towns, because “those kinda problems” don’t exist there, is so wrong. Small towns have their own rules and policies, sad to say. The legal system gets away with so much, because no one cares enough to look in on their practices. So minorities are just easy pickings for the system!

BC: Prior to your lawsuit, what did you know about the Tulia drug raid?

RK: The Tulia raid was so much more worse! Those people actually went to prison. Their informant was a police officer who just didn’t care! When I first heard the story, I remember saying to myself, “Man, those poor people gotta suffer like that and no one cares enough to step in and help.”

BC: Police drug raids have occurred in your Hearne neighborhood since you were a girl. What differences are there between those earlier raids and the 2000 raid that you became a victim of?

RK: There really was no difference in the drug raids, they were pretty much all the same. It’s just this time so many of us were fed up and most of us took a stand together and said we weren’t going to take a plea, ‘cause we were innocent. We agreed to just sit it out!

BC: Have there been more abusive drug raids than the Hearne and Tulia raids that still aren’t widely known?

RK: As far as raids, I can’t say I know of any. You have to understand ONLY bold people go for the raids. That means they have enough confidence and don’t care if attention is brought to them. Police have been doing the individual raids for years. The one on one is better for them, no one really pays attention to this. If we were to go back and look at every person who is locked up for drugs, I’m willing to bet my life that we would have to release more than half of them for false evidence!

BC: You embarked on the suit against Paschall because you wanted to have your arrest record expunged and your name cleared among your fellow townspeople. How well did the ACLU lawsuit help you achieve these goals?

RK: The ACLU worked very hard at getting our records clear because it meant so much to me. As far as clearing my name, although it’s cleared in some people’s eyes it really doesn’t mean a thing in others.’

BC: You and the other ACLU lawsuit plaintiffs have been the target of what could be characterized as low-level harassment from Hearne’s cops. What sort of abusive police behavior are we talking about? Have you borne the brunt of these encounters, or has it been spread out evenly?

RK: A lot of the guys quickly caught other drug charges right after and during the civil suit. I really don’t want to say my harrassment is worse than others because I see everything that we’re going through as retaliation for taking a stand!

BC: How did you transition from lawsuit plaintiff to public advocate against drug war abuses?

RK: I’ve been doing public speaking on these issues since 2001. I have to admit it was a learning process. I always was one of those people that felt like, “Well if I do right, I don’t have to worry about the police. Or if it’s not happening to me, it’s not my problem.” I also thought this drug raid routine we had was something that was only going on in our town. This is something that takes place in all minority communities across America and it has to end!

BC: President Obama wants to revive the Byrne Grants program, which funded the type of militaristic drug task force that arrested you and those 26 other Hearne residents. Who’s leading the efforts to challenge this revival?

RK: Thank GOD for the ACLU. They are the leaders in this project. It’s really up to the communities to start getting behind these issues and start speaking up. Seriously, do people not care how this so-called “war on drugs” is affecting our communities? It’s really the “war on minorities” and it’s killing our families. It’s leaving millions of children displaced in the system due to no mother or no father and in many cases, both. We should be more focused on drug rehabilitation centers, playgrounds, community centers, etc. Not pushing this money into the hands of people who will do whatever it takes to get another notch on their belt! It’s time people start being held accountable for ruining lives! I will continue doing my speaking engagements on these issues until the people in our communities start seeing ‘real change’!