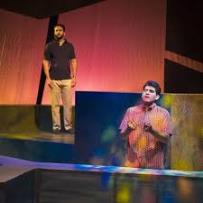 The place is San Diego, California…right next to the heart of Mexico. A young mexican boy Ulises A. Toledo (Salvador) Lives in Mexico. Then by accident, Tom (William Giammona) gets involved with Ulises in Mexico. And — the steam is huffing and puffing. How can Tom bring Salvador into the United States? I’ll let you work that one out. It’s a puzzling drama.

Tom is divorced. His wife Cara (Dana Zook) is Jealous and now married to someone else — however Cara is carrying a heavy load. She’s still in love with Tom who is now Gay. Oh my — pick up sticks.

The main characters Dan, Tom, Buddy, Richard, Julie, Salvador and Cara are on a roller coaster ride of comedy and drama.

Yes, there is suspicion and hatred. Are they happy? What is happy? They are still trying to figure out if their love affairs will last. I don’t think so. But, that is the way life is.

This play keeps you on the edge of the stage. It really sucks you in. Believe me…it hangs with you.

You’ll laugh and you’ll cry (in a clever way). Yeah — emotions on this stage will rock like a boat.

Sure there are some problems (very little) — but between the angst, there is funny/good times. For now.

The entire cast gives fantastic nuanced performances. Audiences will come out praising the performers. They are real — and you will feel your heart beat thru-out. And another surprise — there is a 15 minute intermission. Love it!

AND STAND UP AND CHEER FOR THE BEST TALENT IN THE CITY: Dale Albright as Dan, William Giammona as Tom, Justin Gillman as Buddy, Jeffrey Hoffman as Richard, Katherine Robbins as Julie, Ulises A. Toledo as Salvador, Dana Zook as Cara. Everyone of them are SUPER STARS****