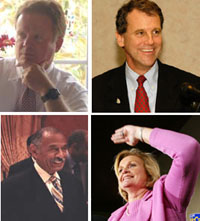 At 9:00 PST last night, what many thought would be a festive evening for national Democrats was turning into a good but not a great election. Democrats were assured of winning the House, but were prevented from a landslide by losing multiple races by small margins in upstate New York and Connecticut. Even worse, Virginia’s Jim Webb was trailing right-wing racist George Allen, and Missouri’s Claire McCaskill was behind 51-46 with 50% counted. But by 10:00 pm, the political world had changed. Webb pulled ahead by 1850 votes, and then by 7000 two hours later. Meanwhile, McCaskill pulled ahead around the same time, and by 11:00pm was declared the winner. Democrats have taken control of the House and likely the Senate (Montana is still too close to call, but Tester leads by 1700 votes and local experts predict his victory)), bringing hope that America’s long national nightmare will soon be over.

The conventional analysis of how Democrats would retake the House last night was that multiple Republican seats would be picked up in the “blue” states of New York and Connecticut. Few thought Democrats would defeat three Republican incumbents in the “red” state of Indiana, both Republicans in New Hampshire, and that Kansas of all places would unseat a Republican for whom President Bush came out to campaign the weekend before the election.

Guess Howard Dean knew what he was talking about when he said Democrats must become competitive in all 50 states. A Democrat even has an outside chance to win the final vote in Wyoming of all places.

Not surprisingly, even before most races were called the folks at NPR and other media outlets were interpreting the election in the most conservative terms possible. They talked about how Democrats were now running on religious and spiritual issues, ignoring the fact that what most linked Democrats was a demand for economic fairness. For all the talk about new Ohio Governor Ted Strickland being a minister, ignored was the powerful economic populism of Sherrod Brown, who won an Ohio Senate seat.

The national media simply cannot accept that voters realize they have been played the fool by Bush and the Republican Congress on economic issues. Most voters don’t follow the Dow Jones average, but they do follow the fact that billions in tax cuts went to the wealthy rather than the middle and working class.

This is what Democrats were saying in this election. True, issues like gun control were neutralized, but Democrats from Wyoming to Virginia talked primarily about economic fairness, and this appeal struck a chord throughout most of America.

The Democratic Senate victories in Virginia and Missouri are incredibly important for two reasons. First, neither state has elected a Democrat to a Senate seat since 2000, so this gives some hope for the 2008 presidential race.

Second, progressives could not have spun this election as sending a message about Iraq if war booster George Allen had defeated leading war critic Jim Webb. Joe Lieberman’s early victory allowed NPR to argue that voters really didn’t care about the war, since exit polls found that 30% of those voting for Lieberman allegedly did so despite disagreeing with his stance on the war.

Republicans portrayed Webb as a single-issue candidate. So his victory prevents Republicans and their media allies from denying the reality that red-state Virginia chose the anti-war candidate.

The Senate victories were also important because many House seats were decided on the basis of the “culture of corruption” surrounding Delay, Ney, Foley, Cunningham, and many House Republicans. Democratic seats won on the corruption issue can be easily lost in two years when the Republicans pick a candidate untainted by scandal.

But the Democratic Senate victories were primarily ideological. Pennsylvania’ Bob Casey is a left-wing radical compared to defeated Republican Rick Santorum, and a huge ideological divide was also present in the Virginia, Ohio, and Montana races.

The media will do what it can to hype “moderate” Casey’s victory while downplaying the progressive wins, but as this election helped show, voters are increasingly not listening to the traditional mainstream media.

What will the Democrats now do? In addition to Speaker Pelosi’s plan for the first 100 days, here are ten things we know for sure.

First, progressive constituencies will no longer have to spend money and time fighting off crazy measures like Alaska drilling, the Sensenbrenner immigration bill, and the host of other right-wing fantasies promoted by ex-committee chairs like the defeated Richard Pombo.

Third, a minimum wage increase will pass Congress and, if Bush vetoes it, an override is possible. Thanks to our good friends at ACORN, state minimum wage increases passed yesterday in Ohio, Nevada, Colorado and Arizona, and none of these elections was even close. Republicans vote against a federal increase at their peril.

Keep in mind that this year Republicans recorded a yes vote on the minimum wage, because they attached it to a tax break for the wealthy. Those games are over under a Democratic-controlled House.

Fourth, a Democratic Congress will not renew Bush’s tax cuts for the wealthy. Bush made this a huge issue for Nov.7, and as he likes to say, the voters have now spoken.

Fifth, no more Sam Alito’s or John Roberts’ on the US Supreme Court. With Harry Reid running things, there will be no risk of preventing a filibuster against a right-wing judicial nominee.

Sixth, the election will likely move newly endangered Senate Republicans like Minnesota’s Senator Norm Coleman to the center. Coleman faces a tough re-election fight in 2008, likely against Al Franken. Based on yesterday’s results, Coleman, Wayne Allard of Colorado and other Republicans in states shifting blue may start voting with the Democrats on key issues.

Seventh, for all the focus on Pelosi, remember that Democratic control means that very savvy progressives like Howard Berman, Henry Waxman, and John Conyers are back in power. In fact, half of the House committees will now be run by members of the Progressive Caucus. Ideally, leading war critic John Murtha would become House Majority leader. With Webb in the Senate and Murtha in the House Leadership, the Democrats position on Iraq would be clear and strong.

Eight, health care will again become an issue. Count on it.

Ninth, immigration reform is back on the table. A far better deal than the prior Senate compromise is now achievable.

Tenth, we are going to return to the days of public hearings on White House abuses. The media will still spin news the Republicans way, but Democrats will have the ability to use hearings to frame the news gathering process.

Finally, let’s review my election predictions. I was wrong (fortunately) about McCaskill winning Missouri, but got the other Senate races. I thought School Board candidate Jane Kim would be in a tight race for third, and she finished first. I thought Bob Twomey would finish second, and he lost. I believed that Kim Shree-Maufas lacked the name identification to win, and thankfully was wrong. I did see Hydra Mendoza winning a seat.

In Supervisor District 4, I picked the top four in the order they finished. Assuming most of Chan’s votes go to Dudum, he will prevail. Ed Jew still has an outside chance, and as bad a day as Mayor Newsom had yesterday, Jew’s election would make him feel even worse.

In District 6, I said that Rob Black had a smoke and mirrors campaign and that Chris Daly would win by a larger than expected margin. Considering that David Binder had Black ahead by 12 with three weeks to go, and that a media supporter claimed that the challenger had identified 7600 pro-Black voters (many of whom apparently thought they were being asked to approve School of Rock star Jack Black, as Rob only got 4312 votes), Daly’s 10-point victory does appear to qualify as larger than expected.

I correctly picked all of the local and state initiatives, but badly missed Berkeley’s losing Prop J (landmarks) and San Jose Mayor’s race won by Chuck Reed over Cindy Chavez.

How sweet it is!