America Has Terrible Traffic Safety Record Because We Drive Too Much 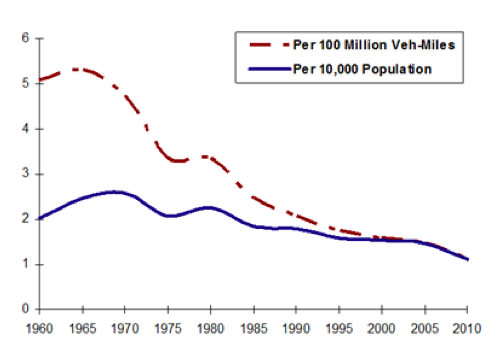 Even though the U.S. traffic fatality rate per mile driven has fallen by two-thirds in the last 50 years, America today still has the deadliest road system per capita in the developed world. Much of the improvement from safer driving and better emergency care has been wiped out by increases in total traffic.

The American approach to traffic safety has emphasized seatbelt use, vehicle standards, and reducing drunk driving. What has been lacking is any effort to reduce driving mileage and enable more people to get around by safer means. And that’s exactly what the U.S. needs to do to make further gains in safety, according to a new report from the American Public Transportation Association [PDF].

Riding transit is much safer than getting around in a car. According to APTA, the fatality risk per mile traveled for bus passengers is 30 times lower than car occupants. For rail passengers, the risk is 20 times lower.

But federal safety policy has largely neglected how transit — or policies aimed at reducing driving in general — can play a role in reducing America’s staggering traffic death toll.

APTA argues that it’s time for a new approach. Here’s why.

Cracking down on drunk driving and imposing restrictions on young drivers — a primary focus of federal safety officials — has saved lives. But the practicality of these approaches is limited by the lack of convenient travel options besides driving.

Research indicates that access to transit can be an effective tool to keep the most dangerous drivers off the streets. APTA cites analysis of DUI rates around DC Metro stations that found crashes involving drunk drivers declined 70 percent after an increase in late-night service. A 2014 NHTSA study found that cities with good transit also have lower rates of unlicensed drivers. But federal officials haven’t incorporated transit or walkable development into their overall traffic safety strategy.

In places where transit ridership is high, traffic fatalities are low

A 2014 study published in the Journal of Urban Health found that cities which increase transit mode share 1 percent can expect to reduce per capita traffic deaths 2.75 percent. APTA speculates that the effect is so large because high transit use is associated with other factors that also reduce risk — compact, mixed-use places shrink distances between destinations and enable people to reduce driving more than the amount that is directly replaced by transit.

In order for the U.S. to be a leader in traffic safety again, APTA says, safety officials need a “paradigm shift” in their approach, one that views increasing transit use as a key strategy.

In response, federal safety officials have at least indicated an openness to considering APTA’s proposals. The National Transportation Safety Board responded with this tweet: