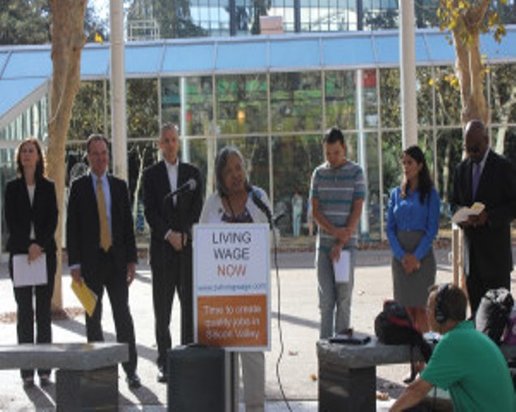 In the Valley of Plenty, one in three residents do not earn enough to get by. As the Santa Clara County Board of Supervisors contemplates creating an ordinance requiring its contractors to pay employees a living wage, a new economic report was released Tuesday, Oct. 14, illustrating the profound and widening economic gap in Silicon Valley.

“With the economic divide in our country at a historic high, unions like SEIU are stepping up our advocacy for all workers, not just those we represent or organize. We hope Silicon Valley employers will follow us and help bring back jobs that sustain families, jobs that sustain our communities,” said SEIU Local 521 Chief Elected Officer Luisa Blue.

The report, “Setting Job Standards for a New Economy: An Innovative Living Wage for Silicon Valley,” lays out elements for the most comprehensive local legislation covering entities that do business with a county.

“With the living wage ordinance we can turn the tide for middle income earners,” said Supervisor and San Jose mayoral candidate Dave Cortese.

With the tech industry booming and the economy rapidly recovering, the average low-wage worker in Santa Clara County is falling further behind. Many who make minimum wage, or just above, struggle to make ends meet in Silicon Valley where the cost of living continues to soar. A living wage, by comparison, is a standard, not a floor, for what workers must earn to be self-sufficient.

The full report, available online here (PDF), addresses the underlying causes and presents a pathway to building a better local economy and strengthening communities throughout the Valley.

Members of the media were invited to view a 3-minute video of Jorge, a security officer who, after 23 years on the job, makes less than $12 an hour.

In the video, Jorge challenges the Board of Supervisors to survive on his salary.  Supervisor and mayoral candidate Dave Cortese takes the challenge at: challenge.svlivingwage.com

Khanh Weinberg is the Director of Communications for SEIU Local 521

This piece first appeared in The Left Hook blog