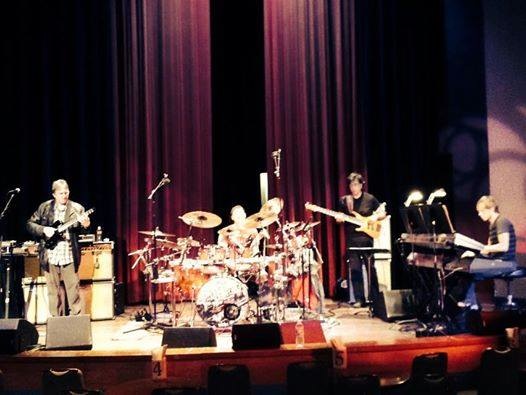 Allan Holdsworth, one of the world’s best known guitarists returned to Yoshi’s in San Francisco last Tuesday and Wednesday, before wrapping up his amazing 3 day stint at Yoshi’s in Oakland on Thursday. Holdsworth has been thrilling audiences the world over for several decades; I first saw him with the legendary Tony Williams Lifetime band of the mid-seventies, and months later with his fellow Brits in the celebrated prog-rock super group U.K., featuring Roxy Music’s Eddie Jobson, and King Crimson’s John Wetton and Bill Bruford. Holdsworth would soldier on with his own groups like I.O.U and assorted trios, displaying the genius he has become known throughout the world for. Many critically acclaimed albums would follow; his guitar synth forays with “Atavachron”, “Road Games”, “Metal Fatigue”, “Sand”, “Secrets”, “Wardenclyffe Tower”, “Hardhat Area” and “Sixteen Men of Tain” in 2000.

Fans of the guitarist will no doubt recall his tribute to the late Williams, “Blues for Tony”, culminating in a CD and DVD recorded live at Yoshi’s a few years ago, featuring Lifetime alum, keyboardist Alan Pasqua, drummer Chad Wackerman and bassist Jimmy Haslip. Haslip rejoined Holdsworth for this tour, alongside drummer Virgil Donati and a new keyboardist Dennis Ham. Holdsworth didn’t disappoint this time around either, running through a gamut of some of his best known tunes with poignant soloing and his humble wit; “Red Alert”, “Proto Cosmos”, and “Fred” from the aforementioned tribute album; “Texas” and “Above and Below”, (my personal favorite), from his most recent album, “Sixteen Men of Tain”; as well as a few classics, including “The Things You See When You Haven’t Got Your Gun”, “Madame Vintage”, “Water on the Brain” and “Letters of Marque”.

Each of these tunes were punctuated by the energetic Donati, who performed like a man possessed, and the ever pleasing Haslip; a masterful bassist who thrilled fans worldwide during his tenure with the jazz group, the YellowJackets. Ham, a recent addition had big shoes to fill in Pasqua’s absence, however he was more than up to the task; his Jan Hammer-like guitar/synth samples were so amazing, many in the audience thought they were hearing Holdsworth, until they realized it was Ham playing those parts as Holdsworth stood silently by, waiting to re-enter the fray.

Long time fans are hopeful for new music from the maestro; his last album was quite a few years ago; however Holdsworth appears rejuvenated and his catalogue reborn under the watchful eyes of Leonardo Pavkovic and his MoonJune Record label; we may yet see something new indeed. In the meantime, enjoy the brilliant Allan Holdsworth whenever and wherever you can. There is no one else like him, and there never will be. He is truly, inimitable.