‘All-In’ Strategy for Dems Could Be Ticket to Budget Reform 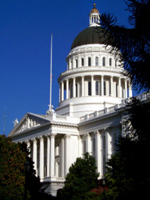 It’s no longer a debate – the blame for California’s current financial crisis falls directly at the feet of the requirement that two-thirds of the state legislature must approve any budget proposal. Minority Republicans’ use of this requirement to refuse to negotiate a compromise budget, threatening vital services for the state’s most vulnerable residents in the process, reveals just how ugly things can get when the majority party finds itself handcuffed by obstructionists. Consensus has been growing for years that eliminating the two-thirds requirement represents an integral step towards creating a truly progressive California, and now rumblings can again be heard among Democratic leaders to place a repeal of the two-thirds rule on the ballot. But these rumblings all point to placing it on the 2010 ballot, when a different tactic – placing the repeal on the special election ballot next spring that will likely be necessary to pass a state budget – could be Democrats’ best chance to enact the change so desperately needed.

It’s becoming evident that California’s endless budget battle can no longer be treated, as much of the mainstream media seems to, as merely another political turf war between Democrats and Republicans. Real consequences for real people continue to mount as the impasse refuses to break.

State funded child care centers, for example, are now kicking kids out due to lack of funds caused by the budget gridlock. Child care represents an essential service for working poor people trying to support their families, and losing it could bring about dire consequences for thousands of Californians’ lives. It’s often easy to ignore what happens in Sacramento, particularly when it comes to process-oriented details that seemingly have little consequence. But right now, it’s this exact sort of detail – the two-thirds requirement in the state legislature – that is leaving working parents with no place to leave their children while they’re at their job.

As Paul Hogarth pointed out yesterday, Democrats tried to repeal the two-thirds rule back in 2004, to miserable results. Proposition 56 lost with only 34 percent of the vote, a crushing defeat that rightly leaves many anti-two-thirds folks wary of being put through the ringer again.

However, realizing that fruitless deadlock will continue until someone addresses the issue, Democratic Senate and Assembly leaders now appear ready to give it another shot. In their comments to the Los Angeles Times regarding the subject, they stressed caution in moving forward, stating they would “order up a lot of polling and focus groups before they decide whether to attempt that move,” and that it probably wouldn’t be until 2010 that the repeal would make it to the ballot.

While this strategy makes a lot of sense at first blush, it may not be the best way to pass a repeal of the two-thirds law.

The 2004 effort failed in part because voters don’t pay attention to what happens to Sacramento. Rather than understanding the consequences of the two-thirds rule, and viewing the initiative as a concrete way to improve the lives of everyday people, it seemed like an effort by legislators to grant themselves more power to tax.

To make matters worse, the ballot Prop. 56 appeared on went before voters during a similar budget squabble. Governor Schwarzenegger came out against Prop. 56, offering up instead a massive bond get the state out of debt. This quick fix passed by a large margin despite it doing nothing to solve the structural budgetary problems plaguing California.

But things have changed since 2004. Voter approval for the Governor has plummeted by almost 40 points, and his endorsement of measures on the upcoming March ballot won’t be likely to help them out. Not only that, but voters appear sick of endless half-measures for alleviating California’s deficit. Now may be the time to make the case that without repeal of the two-thirds rule, we’re relegated to an endless re-run of the same show – deadlock, borrowing, and real suffering for real people.

Because the upcoming March election will likely be entirely about the budget, it represents an excellent opportunity to draw a clear connection between the two-thirds rule and the problems plaguing the state, as well as capitalize on Schwarzenegger’s declining popularity and voter resentment at obstructionists preventing a budget from being passed.

The strategy would be simple:

• Allow Republicans to put whatever they want onto the ballot – lottery borrowing, spending caps, you name it. Democrats would only place one measure on the ballot – the two-thirds repeal – and argue that voters have a choice. They can continue to choose stopgap measures and financial trickery, or they can vote for real budget reform.

• Placing one initiative on the ballot would focus Democratic efforts and resources on one campaign, rather than spreading it thin over a variety of budget-related efforts. This could grant the fire power necessary to achieve victory.

• Ensure that voters know the real consequences caused by the budget impasse. Make the face of the campaign working people with no childcare, adults going back to community college who now can’t find classes, and the recipients of community non-profit services that must now go without.

• Point out that the special election is costing taxpayers $50 to $100 million. Argue that taxpayers may have to keep paying that tab, year after year, until reform happens.

• Finally, make sure rank and file California Democrats understand what’s happening in Sacramento. Repeal of the two-thirds rule shouldn’t be about taxes – it should be about allowing elected Democratic legislators to do their job, and demonstrating that a small group of Republicans will continue to be able to bring the state to a standstill without reform.

Rather than wasting any more time on the state’s budget when it’s clear that structural change is necessary to achieve real progress, it’s time Democrats focus on the actual problem – the two-thirds rule. Yes, this ‘all-in’ strategy for the March election is risky. But even riskier is allowing any more time to pass as Republicans, year after year, hijack the most important process our state legislators are charged with – passing a budget to fund our state.