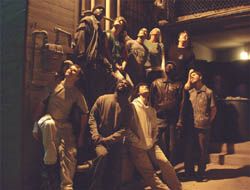 Nationally-touring Afrobeat powerhouse Albino! will be performing at the Elbo Room in San Francisco on June 25th.
Don’t expect to see any musicians with congenitally deficient skin pigmentation in the band Albino! This Berkeley-based, 14-piece all-star ensemble honors the fiery legacy of Afrobeat inventor Fela Kuti by melding tightly-crafted arrangements and nuances of jazz harmony with propulsive, high energy grooves. For the innocent bystander, any visit to an Albino! show inevitably becomes an all out booty-maneuvering experience.

Formed in 2003, the members of Albino! hail from such diverse acts as Spearhead, CK Ladzekpo, and Hamsa Lila, among others. Since this group’s inception, world-beat and jamband lovers alike have latched-on to the primary ingredient behind this band’s truly broad appeal: Albino! simply brings the house down every opportunity it gets!

Among the 14 musicians comprising Albino’s powerful line-up, is singer/percussionist Kokou Soglo Katamani of Ghana and Togo, West Africa. A professional drummer in the Ewe tradition, over the past 30 years, Kokou has studied, performed, and taught traditional and modern African music, taking him throughout Nigeria, the capital city, Lagos, and Fela Kuti’s Kalakuta Republic. Kokou is also a teacher and works and performs with master drummer, CK Ladzekpo, in the West African Music and Dance Ensemble.

On drums is Michael Pinkham, whose slinky yet driving rhythms have been a driving force behind such acts as Electro-Brazilian-Funkateers and Ubiquity recording artists, Superbacana, as well as the Sun Masons, and his own jazz septet, the Pink Ham Ensemble, which also features G. Love & Special Sauce bandmate Jim Prescott, a.k.a. Jimi Jazz.

Percussionist Trevino Leon of Cuba, has travelled extensively as a professional drummer in the Ewe tradition for the past 27 years. He also specializes in Afro-Cuban drumming & music, and performs with the West African Music and Dance Ensemble. Trevino is fluent in Efik, a Nigerian dialect, and Lucumi, a Cuban form of Nigerian. He teaches Ghanaian, Benin, Nigerian and Cuban African drum theory, history and dance workshops around the San Francisco Bay Area.

Percussionist Gameli K. Ladzekpo, nephew of master drummer CK Ladzekpo, brings his experience in Ewe music to the Afrobeat sound of Albino! as well as the West African Music and Dance Ensemble. Originally hailing from Ghana, Gemeli is now a producer for Oakland-based label, Be About It Productions, where he is also a beat creator for numerous bay area hip-hop artists.

Tenor guitarist Cal Reichenbach holds down the guitar chair in the San Francisco-based funk/jazz groups Starvin Like Marvin, and Guru Garage, and is also making a name for himself as a budding TV tune-smith, having recently had some of his work broadcast on the Cartoon Network. Also adding to the polyrhythmic interplay of the Albino! rhythm section is Jacob Groopman on rhythm guitar. Trained as a jazz guitarist, Jacob has been known to play anything from funk to jazz and even bluegrass and acoustic music. Having toured the states and Europe in a world-class jug band, he’s still the youngest member of the band, at 22.

On bass is Kevin Blair, a 24 year-old groove-wunderkind & disciple of the low-end wizardry of bass titans Jaco Pastorius, & Paul Jackson of the Headhunters. Acquiring knowledge of the musical customs of the Khoisan tribe, and the Xhosa tribe (Nelson Mandela’s tribal group) of South Africa, Blair has spent time studying and performing in Cape Town, and other townships within Western Cape region of that country.

But any summary description of Albino’s line-up cannot be made without mentioning the band’s five-piece horn section. These five musicians collectively share the duty of articulating the band’s infectious pulse with the punchy horn lines that are as endemic to the essence of Afrobeat music as is the music’s propensity to lead its listeners, body and mind, into a kind of groove-fed state of ecstatic oblivion. On tenor sax and flute is Nathan Endsley, who leads Albino’s 5-piece horn section and is an Albino! co-founder. Endsley who was a one-time contributing member of the popular pan-indigenous-culture influenced Trance/World-Beat ensemble Hamsa Lila, brings his considerable talents to the group as writer & arranger on various Albino! compositions. On trumpet is Joe Balestreri, a veteran who has worked with such artists as Brown Baggin’ among many others. On trombone is Seattle jazz disciple, Charlie Wilson, and on dual baritone saxophones are Michael Bello and Jonathan Hoops, leader of the famed West Coast Rhythm Section, and featured soloist for Burning Man sensation, The Mutaytor.

By bringing to the fore their positive energies, musical intuition, and a committed group-ingenuity to remain true to the Afrobeat tradition while not being confined by it, the seasoned musicians that constitute the band’s line-up (including those not mentioned) get the music rolling! Do yourself a favor: go see Albino!