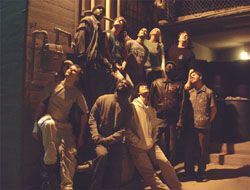 ALBINO!, the heaviest Afrobeat band on the West Coast will play it’s first show in the East Bay Area on Friday April 22nd at Berkeley’s premier nightclub, The Shattuck Down Low. At this show, Albino! will present for the first time, a number of new compositions inspired by traditional Afrobeat and infused with truly relevant social and political commentary.

During their first year, Albino! played to sold-out venues in six states, quickly establishing the band as a national touring act with instant appeal. Returning home this April, Albino! will break into the East Bay scene with it’s first local show in three months. With six previous shows in San Francisco over the past year packing major local venues such as The Elbo Room, The Independent, and The Last Day Saloon, Albino! looks forward to a blazing success at the Shattuck Down Low.

This 14-piece all-star ensemble honors the fiery legacy of Afrobeat inventor Fela Kuti by melding tightly-crafted arrangements and nuances of jazz harmony with propulsive, high energy grooves. Formed in 2003, the members of Albino! hail from such diverse internationally-known acts as Spearhead, CK Ladzekpo, and Hamsa Lila, among others. Since this group’s inception, world-beat and jamband lovers alike have latched on to the primary ingredient behind this band’s truly broad appeal: Albino! simply brings the house down every opportunity it gets! So be warned: for the innocent bystander, any visit to an albino! show inevitably becomes an all out booty-maneuvering experience.
Friday, April 22nd, 10:00 pm – 1:30 am, doors open at 9:00
Tickets $10 @ the door, $8 for students with Student ID
Advance tickets available at box office for $10