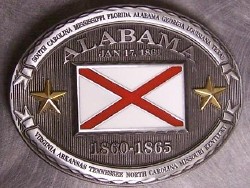 In June, the Alabama state legislature passed HB 56 – the harshest anti-immigrant law in the country – which, among other provisions, allows police to arrest anyone they may suspect are here illegally and do not have papers. Last week, the police arrested a white, German immigrant who had left his passport at the hotel. Because the law accidentally targeted a white person (and not one of the “brown people” who take jobs that Americans don’t want), Republican politicians who voted for the bill are having second thoughts. They’re talking about revising HB 56, because of its “unintended consequences.” Further adding insult to injury, the German man was an executive for Mercedes-Benz – whose opening of auto plants in Alabama back in 1993, was viewed as a major economic coup. Now, Alabama’s long racist history has again reared its head – becoming a huge liability.

HB 56 passed several months ago, with all Republicans in the Alabama legislature except one voting for it. Besides requiring those the police suspect may be here illegally to carry their papers, the law bans the children of undocumented immigrants from attending public schools and even nullifies any business “contract” with an illegal immigrant.

On November 16, a German executive for Mercedes-Benz was paying a visit to one of their auto plants near Tuscaloosa, where he was pulled over for driving a rental car without a tag. The cop asked him for his driver’s license, but the only paperwork he had with him was a German ID card. Now, politicians are calling it an “embarrassment.”

Some of the same Republicans who voted for HB 56 are talking about repealing it – or at least amending it. In the process, they’re exposing their real motivations behind the law.

While many don’t know it, I am an immigrant. I was born in England to a British father and French mother, and we moved to the United States when I was one. When I applied for U.S. citizenship at 18, most people assumed I was Canadian. And when right-wing politicians push laws like Arizona’s SB 1070 or Alabama’s HB 56, I take it personally.

So on the occasion that I’ve confronted people who support such laws, I always point out that I’m an immigrant. But when they find out what country I’m from, their reaction is unbelievably hypocritical. “Oh, how wonderful,” they say. “Do you speak French? Have you been to Paris?” Apparently, white immigrants from Western Europe are okay.

Consider what State Senator Gerald Dial, who voted for HB 56, told Bloomberg News upon hearing of the German executive being arrested: “I was really embarrassed and overwhelmed. Mercedes has done more to change the image of Alabama than just about anything else. We don’t want to upset those people (my emphasis).”

With a large influx of Mexican immigrants coming to Alabama and other southern states (due to the fact that they’ll take agricultural jobs at lower wages), we are now seeing an anti-immigrant backlash. As some pundits have dubbed it, Jim Crow is now giving way to Juan Crow. But since the legislature passed HB 56, employers are leaving the state – and even legal immigrants who would not risk the kind of racial profiling would rather find jobs elsewhere. Now, they’ve made the mistake of profiling a white immigrant.

Back in 1993, Mercedes-Benz built auto plants to Alabama – a trend that has encouraged other foreign car companies from coming to the United States, and creating jobs. At the time, it was viewed as such a major coup for Mercedes to come to Alabama – because of the state’s perception as being racist and intolerant. Apparently, old habits die hard.