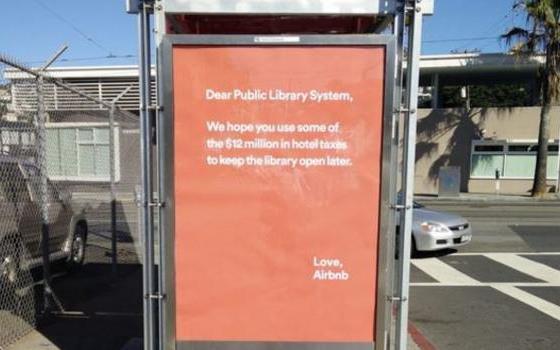 My October 20 article touting Airbnb’s marketing prowess in San Francisco’s No on F campaign was followed a day later with its new messaging strategy on bus shelters that undermined my praise. The now widely panned campaign, which Airbnb saw as a way to highlight its hotel tax payments to the city, included ads like “Dear Public Library System, We hope you use some of the $12 million in hotel taxes to keep the library open later. Love, Airbnb.” Another stated, “Dear Recreation & Parks, We hope some of the $12 in hotel taxes keeps this park clean. Love, Airbnb.” In response to the furor caused by the ads, Airbnb CEO Brian Chesky wrote to his employees: “Yesterday I heard from so many of you about how embarrassed and deeply disappointed you were in us. You were right to feel this way.”

Airbnb gets an A for damage control. It combined Chesky’s public apology with the immediate withdrawal of the ads. But this messaging snafu only resonated so strongly because of growing distrust of Airbnb over its $8.5 million No on F campaign. As occurred when Big Soda spent millions to defeat a November 2014 SF soda tax, Airbnb’s excessive spending on No on F has actually weakened public support for the company’s broader agenda.

I argued after the November 2014 elections that corporate interests spend heavily on initiatives to do more than win the particular campaign—they want to shift public perception of issues in their direction. Airbnb spent so heavily to defeat Prop F not because it thought it needed to do win but rather to achieve a large enough victory to forestall future restrictions on the short-term rental industry.

But in seeking a landslide victory  Airbnb bypassed promoting the benefits of its business. A campaign accusing Prop F of promoting neighborhood spying and conflict does not affirmatively build support for short-term rentals.

As with Big Soda’s big money No on E campaign to defeat the San Francisco soda tax (which actually won a 55% majority but needed a 2/3 vote), the excessive spending to defeat Prop F seems to have left people even more committed to pushing for reform. I’ve heard more negativity about Airbnb than ever before, and it’s far more directed at the No on F campaign than to the short-term rental industry itself.

I wrote in May that one obstacle a short-term rental ballot measure would face is “the problem of greater voter intensity among opponents. Short-term rental hosts have a powerful financial interest in renting out units, while those unhappy about their neighbor’s unit being rented to tourists are unlikely to be motivated enough to walk precincts on weekends.”

I think the No on F campaign still has greater intensity among its backers, but  public discontent in San Francisco over the short-term rental industry is intensifying. At this point, many will disregard even a huge Prop F defeat as not being a fair fight.

Airbnb must realize from the furor over its bus shelter ads that it has lost ground in San Francisco. The company also may recognize that the virtual unenforceability of the current short-term rental legislation is not sustainable.

After the election I would not be surprised to see the type of grassroots protests against Ellis evictors also start targeting violators of short-term rental laws. It will be a different type of neighbor v neighbor conflict than suggested by the No on F campaign, and will be waged outside the courts.

With a high turnout election set for November 2016, Prop F could be the first rather than the last of ongoing efforts to further restrict short-term rentals in San Francisco. Absent new legislation, voters concerned about short-term rentals but who see Prop F as the wrong “fix” could feel differently if given a chance to vote on a different ballot initiative next fall.