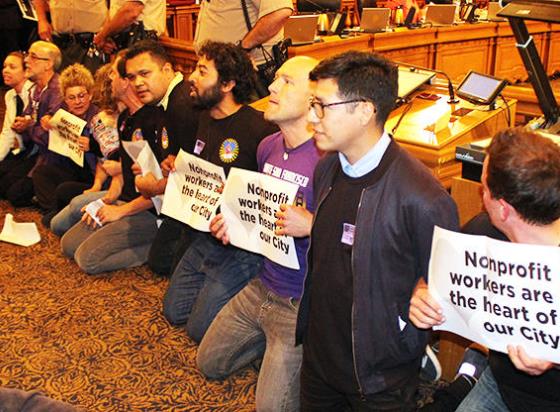 Airbnb ‘s announcement last week that it has paid San Francisco tens of millions of dollars in back taxes  came at a perfect time.  That’s because on February 25 at 10am the Supervisors Budget and Finance Committee is considering giving nonprofits the additional .75% in cost of doing business funds that they did not get last July due to “fiscal concerns.”

Airbnb’s estimated $25 million is far more than the $3.4 million necessary to cover the proposed nonprofit raises. It allows San Francisco to rectify its unfairness to  nonprofits this budget year and still have over $20 million in new funds for other purposes.

Raisng nonprofits an additional .75% does not change the fact that the city gave already lower-paid nonprofit workers only 1.5% raises this year while awarding  the Board of Supervisors  2.6% and city workers from 2.5-5%. The .75%  would bring nonprofit workers raises to 2.25%, still the lowest hike of any workers performing services for the city.

Last June, the Board simply stiffed the city’s nonprofits. For the first time in memory, it did not increase the amount (1.5%) included in the mayor’s budget. Considering mayors routinely start with a lower increase amount assuming the Board will raise it, the Supervisors’ failure to do so betrayed the nonprofit sector.

The Board preaches reducing inequality, but then went ahead and gave the city’s lowest raises to some of the people performing the city’s hardest and most thankless jobs, such as  janitors in supportive housing, workers in homeless shelters, and those providing AIDS services— to name just a few performing vital services.

But thanks to Supervisor David Campos’s leadership in pushing the Airbnb back tax issue, the Supervisors can now correct their mistake. This provides a particular opportunity for Supervisor Scott Wiener, who opposed fair raises to nonprofits this year and whose November 2014 Prop B took over $20 million from the general fund to unspecified transit projects.

Wiener kept insisting Prop B wouldn’t hurt nonprofit workers, even though the nonprofit sector has always suffered the most when money is tight. The vote on the .75% increase gives Wiener and the Board’s other Prop B backers a chance to prove that the initiative will not hurt nonprofits—at least this year.

For a city that prides itself on having the nation’s highest minimum wage, a living wage, and a local health care program, many San Francisco elected officials still fail to see low-wage nonprofit workers as a problem. The city aggressively targets wage theft, but does not see anything wrong with paying fulltime nonprofit workers less than $30,000 annually. Nor is it bothered by not paying nonprofits to keep up with rising health care bills and other costs over which they have no control.

Nonprofits face a “raises not roses” situation. Mayors and Supervisors lavish praise on nonprofits at program openings or fundraisers, but then don’t provide the resources nonprofits need to succeed.

When a nonprofit fails to effectively perform, rarely if ever does the media attribute this to lack of adequate city resources. Yet nonprofits are held to a much higher standard than for-profit businesses, despite being restricted in the amount they can charge for rent and other services.

So while a .75% is barely a drop in the bucket, it does reduce nonprofit inequality and move San Francisco in the right direction. Let’s hope the Board of Supervisors agrees now, and then uses the remaining Airbnb funds to ensure  fair raises for nonprofits in next year’s budget.

Randy Shaw is Editor of Beyond Chron, which is published by the Tenderloin Housing Clinic, a San Francisco nonprofit.