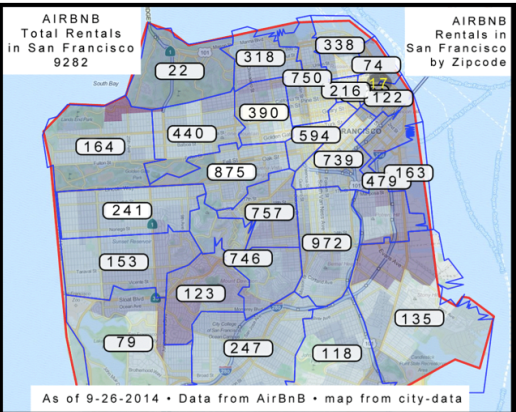 On November 24, opponents of San Francisco’s short-term rental legislation held a press conference at 888 Brannan, the headquarters of Airbnb. The group announced plans to gather signatures for a November 2015 ballot measure imposing new rules on Airbnb. It also called for the city to start collecting the $25 million in back taxes that Airbnb allegedly owes.

The event made it clear, as I wrote on October 30, that Mark Leno will make Airbnb the centerpiece of his challenge to Mayor Lee. My earlier story noted that Leno “recognizes that the Airbnb measure creates an opportunity to define the 2015 mayor’s race around short-term rentals.” Leno will soon announce his candidacy with the signature drive for the Airbnb intiative becoming a prime recruitment vehicle for his campaign.

Some question Leno’s ability to harness disaffection over Airbnb into a winning mayor’s race, arguing that not enough voters cared about Airbnb to make a difference. And while I do not see the issue as sufficient for Leno to overcome Mayor Lee’s many other advantages, Airbnb becomes the tent post for a range of related issues that Leno can challenge Lee on during the campaign.

As I stated previously, “Suddenly, the November 2015 election is no longer about Mayor Lee achieving an economic miracle in Mid-Market. Or building more affordable housing, investing in neighborhoods, or ensuring cleaner sidewalks and streets. No, the November 2015 election instead becomes about saving our neighborhoods from year-round tourist rentals. The accompanying ballot measure restricting the Airbnb law would come to define the differences between candidates.”

I’ve heard from those who believe Airbnb backer David Chiu’s Assembly victory in a progressive district shows that the issue could not hurt the mayor. But the Airbnb legislation does not take effect until February, so no horror stories about the new legislation’s impact were heard in the November 2014 election.

The Mayor has already committed to support trailing legislation modifying the Airbnb measure passed by the Board. He has publicly backed a provision ensuring nonprofit enforcement, and has been in talks with Senator Dianne Feinstein over amendments to address her concerns.

If the Mayor backs amendments that satisfy Feinstein, the impact of the Airbnb initiative on the mayor’s race is sharply reduced. The Mayor now has greater freedom to modify the legislation since Chiu will be replaced in District 3 by a mayoral appointee. Considering that key votes on Airbnb passed 6-5 with Chiu in the majority, the political dynamics of the issue will change without any other Board member changing their position.

I found it significant that the coalition does not yet have specific language for its initiative. Speakers talked about greater transparency, more restrictions on tourist rentals, and reclaiming back taxes, but all of these issues can be resolved through trailing legislation. In other words, Mayor Lee has the ability to forestall a ballot initiative by working with opponents on a compromise that might not satisfy everyone, but will reduce the issue’s impact in the mayor’s race.

$25 million in back taxes

The back taxes is the most politically potent Airbnb issue, as the public is always upset when a big corporation avoids the type of payments that they have to make. At the Board, opponents of legislation requiring Airbnb’s to pay $25 million in past transient occupancy taxes made two arguments.

First, they claimed that the $25 million had no basis in fact. Second, they argued that Treasurer Cisneros indicated he did not need Board action to collect the back taxes, so that the legislation was unnecessary.

I have never seen a detailed breakdown of the $25 million but since we are talking about a specific number of rentals at a specific rate for a specific time period the amount of taxes owed should not be hard to determine. Airbnb disputes when it was obliged to begin paying the taxes, but if the parties disagree it can be resolved by the courts.

The back taxes issue arose when Cisneros announced back in April 2012 that websites like Airbnb, VRBO and HomeAway “had the same obligations as hotels to collect and remit the tax. Airbnb initially resisted, saying it wasn’t a new type of business model distinct from hotels.” Airbnb later agreed to start paying the tax on October 1, without accounting for rentals made in the prior two years after Cisneros said the taxes were owed.

According to Carolyn Said of the SF Chronicle, “Cisneros declined to say directly if his office will pursue Airbnb for back taxes.” Instead, he released a statement saying “We take enforcement actions to get people to say what they owe,” he said in an interview last week. “We cannot talk about any particular enforcement action or any particular taxpayer because of taxpayer confidentiality laws.”

So Cisneros may already be collecting the back taxes. And if he’s not, he needs to explain why.

Leno needs an issue to run on against Lee, so from his perspective all this talk over how much Airbnb owes the city is for the good. Leno needs this election to be about the issues where he sees voters opposing the mayor;  the last thing he needs is for the mayoral campaign to be about Mayor Lee’s record success at job creation, Mid-Market revitalization, or his leadership in passing a $1.3 billion affordable housing trust fund.

Randy Shaw is editor of Beyond Chron. He analyzes San Francisco politics in The Activist’s Handbook: Winning Social Change in the 21st Century