“After the War” -– Gigantic epic; Colour Me Kubrick Reprise 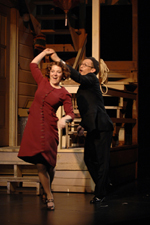 THE WAR AT HOME

If Tennesse Williams were alive today, this is the play he would have written. The Kotanda play is very Tennesse-esque with it’s varied subplots along the way. When the curtain opens you will be overwhelmed by the Donald Eastman scenery design. They didn’t just build a set on the stage; they replicated an entire house that would have been in the Western Edition of San Francisco.

The revolving set shows us a living room, a kitchen and a backyard. As it turns we see a bedroom, stairs leading to the bedroom and as was the custom of the houses from the era a three story back stairs with three landings. The towering building is an architectural marvel. Maybe they should have had the set designer draw up the plans for the hideous new Federal Building at 7th and Mission.

The playwright says: “No one is ever one thing: The label that’s been given to them, the definition that one has accepted and lives within, nonetheless, so much of what we work and live by seems based on these seemingly transparent assumptions.” Phillip Kan Gotanda, in the preface to ‘No More Cherry Blossoms’.

And that is just what this play is about. No one in the play is exactly what we may think they are. This is a time to throw away pre-conceived notions about people. “Look at me” – one of Japanese actors says in the play to a black man. “I am not different than you.”

“War” is a story about many things. Yes, it’s about Japanese people who were unjustly interned during World War II – but it is more than that. It is about prejudice, love that must hide from view and family destruction. Olga, an immigrant Russian reminisces – “I wish I could afford to buy things. You can make a cake right out of a box now.” It’s a heart breaking statement. That something so simple could become so touching. Especially with the sound of the Andrews Sisters singing in the background “Don’t Sit Under The Apple Tree.” The emotional impact is truly remarkable. This intimate drama will surely bring the gifted Kotanda new fame.

Then there is the Gorgeous Blonde who says to a lover: “Did you think that I gave the China Man a Blow Job?” He barks back: “Don’t use those words”. She, back at him: “You didn’t mind those words when I was doing those words.” You know what? When they are on the third floor back porch – you can almost hear “Stellaaaaaaa!”

This rooming house has lots of secrets. There is a quirky guy, who reminds of the great Peter Lorrie. He is creepy, but lovable at the same time. He falls for Olga, the Russian. However, she is looking for a way to escape from the older Asian man who is controlling and has lots of money.

The Gotanda play couldn’t be in better hands than Carey Perloff’s astute direction. It’s extraordinary. All the players are brilliantly effective as they portray damaged Americans in a drama that verges on underlying violence.

Lydia Tanji Costumes are superb and the lighting by James F. Ingalls and Nancy Scherter is thrilling and super effective. And I do want to mention the sound. The Quality was the best I’ve heard this season. Loved every note. No crackle and pops here.

You really will enjoy the performances in this play that now joins the great plays of modern stage history.

COLOUR ME KUBRICK REDUX
(Now playing at the Lumiere)

Imagine Stanley Kubrick, the film director living in a lower class neighborhood in London and going to Bars (Gay-ish) and hitting up on hustler types. He tells people that he is living quietly, because he is so tired of all the Hollywood razzle dazzle. And because he is Stanley Kubrick everyone is all too eager to pick up his drink tabs and wine and dine him because Kubrick drops hints about a new movie that he is casting and he is looking around for new talent. “Tom Cruise”, wanted to be in it – but I turned him down. He just wasn’t right for the part.” John Malcovich plays the role of Stanley Kubrick in this film that was put together with a lot of input from the Kubrick family. The key word here is “Imagine” because this tru-ish story is about a con artist who pretends to be Stanley Kubrick. But, his passport shows that he is really Alan Conway

Through the 1990’s the real Conway managed to pull off an amazing and brilliant scheme to become the director (Kubrick) who lived much of his life as a recluse. Hardly anyone knew what he really looked like, so it was easy to convince people that he was the real deal. It was a marvelous deception. While he lies back on his bed you can practically imagine what is going through his mind. “OooooooooooH, what fun I’m having. The drinks are free. I’m so adored; I’m being showered with gifts…everyone wants to be seen with me. OooooooooooH…it’s all so grand.” At times Malkovich reminds of Norma Desmond waiting for the cameras to start rolling. Believe me – this con artist has convinced himself that he is Kubrick – even though some of the Hollywood stories that he tells, has holes big enough for a semi truck.

The film becomes bigger than life is this quirky but funny film. And it’s all done in a Kubrick-esque way. Anthony Frewin, Kubrick’s personal assistant, wrote the screenplay. Film buffs will be just ecstatic. Here is one particular juicy scene. The make believe Kubrick walks up to a young man in a bar and says something about working on a movie. The young man says: “Are you some kind of Hollywood producer or something? Kubrick leans over and whispers in his ear. – “I’m Stanley Kubrick”. The kid is seemingly entranced, but he has a plan. He begins to name several of his favorite Kubrick films and throws one in that was directed by Stanley Kramer. Through all of this the imposter is smiling his approval at the praise of the films. The young man says to him: –“The last film I mentioned was directed by Stanley Kramer. If you’re going to pretend to be someone who is famous – you better do some research.” A Chagrined fake Kubrick slinks out the door. Beware of those film buffs…they will trip you up every time.

Another ruse he would use to impress people is to seek out a really classy neighborhood and tell his adoring new fans the address. The would pull up to pick him up and he would be on the doorstep – saying that he thought it would be better if he met them outside. “It would take less time. I’ll invite you in next time.” Of course, after they realized that they had been scammed, they would return to the address demanding to see The Director. The residents knew of no such person. There were always posh addresses for him to give out. And, it worked like a charm. Malcovich cons us too. We fall in love with him. We want him to succeed in his reckless con game. His lies become endearing. He pressed many ego buttons on the screen, and he also pressed ours.

This is the one movie that you won’t want to miss. It will only play at the Lumiere for one week. If you think that La Cage Aux Follies was hilarious – wait until you see this. It’s engrossing, entrancing and exceptionally well written and witty. Here is the cast: John Malkovich, Marisa Berenson, Ken Russell, Richard E. Grant. The extremely exciting directing is by Brian Morse.

I believe that this film will overwhelm the theater and that it will continue at another venue like perhaps The Embarcadero for a very long run. Maybe months. It’s the best fun you’ll have this year.