SF’s Mission After the Moratorium 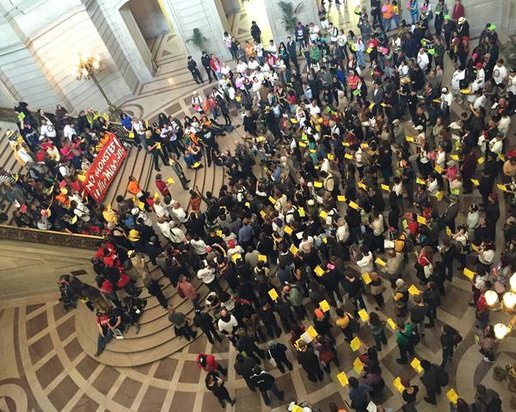 Let’s assume that either the Board of Supervisors or voters pass the proposed Mission moratorium on market rate housing. And that it continues for the maximum allowable time of two years.

How will this change the neighborhood’s future?

Moratorium backers hope that the two year delay will lead developers of some of the 15 projects impacted by the construction halt to sell their land to nonprofit groups. Some may do so, particularly if they bought at the top of the market and can find less contentious sites elsewhere. Others have already invested so much in plans and permits that they will simply wait for the two years to end.

Recall that very few housing units were built in San Francisco from 2008-2013. Only 73 were built last year. The Eastern Neighborhoods rezoning process effectively imposed a much longer moratorium on Mission market rate housing than is now being contemplated.

Unfortunately, this long period without market rate construction in the Mission was not accompanied by aggressive nonprofit acquisition of sites. This was due to a lack of funds and the absence of a Mission-based nonprofit housing developer to fill the gap caused by the city’s defunding of Mission Housing Development Corp.

Today, this scenario has changed. The November San Francisco housing bond, strong prospects for new state money, and Mayor Lee’s Small Sites Acquisition Program all offer affordable housing resources to the Mission lacking in recent years. And with MHDC back in the development business and now joined by MEDA and other city and even statewide nonprofit groups like Bridge, the capacity is there to make use of available funds.

This combination of increased funding and nonprofit development capacity will increase the Mission’s affordable housing stock even without a moratorium. But the best case scenario offers the chance for nonprofits to pick up additional sites currently slated for market-rate projects.

I doubt that even the strongest moratorium backers believe that stopping market rate housing construction will diminish public demand to live in the Mission. If that were true, demand would have declined during the long halt caused by the Eastern Neighborhoods rezoning.

So if housing demand stays the same and no units are built, those desiring to buy in the Mission have four choices: buy a TIC through an Ellis Act eviction, purchase a TIC through an already Ellised-building, buy a building and do an owner-move in eviction, wait to buy until the moratorium ends, or buy elsewhere.

These options leading to evictions are very bad for tenants.

Pro-construction proponents blame the current rash of such evictions on a lack of for-sale supply, believing that a moratorium will worsen tenant displacement. Moratorium backers argue that new construction has done nothing to reduce pressure to convert rental units to ownership, and that the demand so far exceeds supply that no amount of housing can be built in the Mission to satisfy it.

For all the apocalyptic talk about the moratorium “Saving the Mission,” its actual impact on neighborhood rents and evictions is likely to be slight. But the symbolism of stopping housing construction in San Francisco ensures an all-out fight should the moratorium qualify for the November ballot (Campos introduced the measure as an emergency ordinance requiring nine Board votes; he in unlikely to get them).

I recently analyzed its prospects for victory in November.

While they prepare for the coming moratorium battle, both sides should unify now behind two critical actions.

First, a percentage of San Francisco’s November housing bond should be earmarked for affordable housing in the Mission. Agreement on this allocation and the exact percentage needs to be decided now, as the bond is being drafted.

Second, agreement should be reached that at least 33% of existing affordable housing funds from all sources other than public housing dollar go to the Mission. This includes the Small Sites Acquisition Fund, which protects buildings targeted for Ellis evictions.

The SF Association of Realtors, which helped kill Ellis Act reform and strongly opposes the moratorium, is a big fan of the Small Sites program. If the Realtors really want to put their money where their mouths are on Small Sites, they would agree to match the city contribution dollar for dollar. This could raise another $15 million for the program, much of which could be spent protecting the Mission’s longterm tenants.

If raising the moratorium finally convinces the realtors to pony up some cash to do something about the affordable housing crisis, it will have done a lot for the Mission community. Regardless of one’s views on the value of increased housing supply, nobody can dispute that the Mission’s development pressures demand increased city resources.