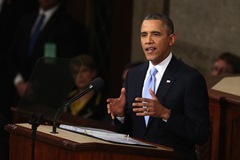 Earlier this month, Working In These Times broke the news that Obama’s promise to raise the minimum wage to $10.10 an hour for federal contractors would not apply to thousands of disabled workers currently receiving subminimum wages—some as low as pennies an hour—under a special exemption from the Fair Labor Standards Act known as 14(c).

Now, Working In These Times has learned that following public outcry from disability, civil rights and labor organizations—as well as from President Obama’s own independent advisory board, the National Council on Disability—the administration has decided to include some disabled workers employed in 14(c) programs in the wage increase.

President Obama is set to sign the executive order raising contractors’ wages today. According to a White House press statement released this morning, the order will now ensure that people with disabilities “working under service or concessions contracts with the federal government will be covered by the same $10.10 per hour minimum wage protections.”

Currently, 420,000 disabled workers nationwide are making subminimum wages in 14(c) programs. Disability advocates say there are no firm statistics on how many of these workers are employed by government contractors, but the number is estimated in the thousands.

The programs are controversial: While some advocates say that they provide valuable opportunities for disabled workers to learn new skills and eventually get jobs, others argue that the programs treat disabled workers as second-class citizens and maintain a situation in which people with disabilities are three times more likely than other American to live in poverty.

Many disability advocates were outraged when they learned on a January 29 conference call with the White House that the federal contracting wage boost announced in the president’s State of the Union address would not apply to 14(c) workers. The National Council on Disability (NCD), a presidentially appointed independent advisory board, wrote in a statement, “NCD believes that the Section 14(c) program is a policy relic from the 1930s, when discrimination was inevitable because service systems were based on a charity model, rather than empowerment and self-determination, and when societal low expectations for people with disabilities colored policymaking.”

Last week, a coalition of 25 civil rights, disability and labor organizations, including the American Civil Liberties Union, the AFL-CIO and the Autistic Self-Advocacy Network, joined the dissent, issuing a letter stating that, “All employees of federal contractors should mean all employees, regardless of disability status. We believe … that it is both economically sound and morally just to ensure that people with disabilities have access to the same wage protections as those without.”

One disability advocacy group, however, defended the exemption. Terry R. Farmer, executive director of ACCSES, a coalition representing employers of disabled workers and a longtime supporter of 14(c) programs, wrote in a February 5 letter to the Obama administration, “There are hundreds of thousands of people with disabilities nationwide who are protected from job loss by the ability to pay them based on their productivity levels. Eliminating the commensurate wage would likely result in individuals with significant disabilities receiving no pay whatsoever instead of a wage that is commensurate with their productivity; consequently denying them the tangible as well as the intangible benefits of work.”

However, the coalition of labor, disability and civil-rights groups disputes ACCSES’ argument that paying disabled workers a higher wage will cost them jobs. In its letter, the coalition pointed to the example of Vermont, which eliminated 14(c) programs in 2003. Vermont invested in the money in wraparound services to help workers transition into regular employment, known as “integrated employment,” instead of 14(c) jobs. Now, 40 percent of Vermonters with disabilities are employed in “integrated employment” jobs, compared to less than 20 percent of workers with disabilities nationwide.

The advocates who criticized the omission hailed the White House’s statement this morning as a partial victory. However, they stress that the executive order will cover only disabled workers in service and concessions jobs, not those engaged in production of goods. According to Allison Wohl, executive director of the disability advocacy group Collaboration to Promote Self-Determination, “The majority of workers being paid less than minimum wage are on product manufacturing contracts, so the impact is minimal to these individuals. However, the manufacturing sector is shrinking. In the long-term, this sends the right message.”

It is unclear why the administration excluded certain groups of disabled workers. The White House did not return Working in These Times’ request for comment. However, the White House did invite two young activists who led the charge for the inclusion of disabled workers in the executive order to the signing ceremony: Wohl and Autistic Self Advocacy Network President Ari Ne’eman.

Ne’eman, the first openly autistic nominee to gain Senate approval for a seat on the National Council of Disability, told Working In These Times that the executive order signals a step toward the elimination of 14(c) programs for all workers at the federal, state and local level.