After Massachusetts, All Eyes Turn to Connecticut’s Bipartisan Dysfunction 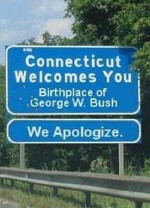 Scott Brown’s win in Massachusetts means that the next stop on the Obama backlash tour could be neighboring Connecticut, where another long-time Democratic Senate seat is up for grabs. Unlike Ted Kennedy, Chris Dodd died only in the polls – prompting him to abandon a run for a sixth term. Dodd’s replacement as the Democratic nominee, state Attorney General Richard Blumenthal, now expects a tough race against either Rob Simmons, a once-moderate former Republican congressman suddenly busy pandering to the “tea party” right wing, or Linda McMahon, the wife of pro wrestling hypemeister Vince McMahon and until recently CEO of their World Wrestling Entertainment, Inc.

I have been checking in with Beyond Chron readers from time to time on the McMahon candidacy. She vows to spend as much as $50 million of the nearly billion dollars in personal wealth she and Vince have accumulated since taking their company public in 1999. And though she still trails Simmons, let alone Blumenthal, she is the figure in this race who personifies the bread-and-circuses pathologies of late-empire American culture and politics.

Early on, McMahon’s opponents put undue resources into viral YouTube clips of such lowbrow Masterpiece Theatre gems as her son-in-law, wrestler Triple H, simulating sex with a corpse, and Linda herself kicking an announcer in the cojones. These attempts to embarrass someone incapable of embarrassment only play into the faux-populist hands of the Nutmeg State’s direct descendent of P.T. Barnum.

In her first unfiltered exposure to the voters on Sunday’s Face the State, the panel of Connecticut reporters – in admirable contrast with network TV cream puffs Matt Lauer (NBC) and Kate Snow (ABC) – focused on lax occupational health and safety standards of the company co-founded and operated by McMahon (who, of course, sports the additional gall of opposition to health-care reform).

During the McMahons’ domination of their business, hundreds of wrestlers have died young from drug abuse and brain damage; they are the canaries in the coal mine of a generation of athletes from the steroid era of legitimate sports. Linda McMahon acquitted herself poorly on these questions, and overall exuded a painfully unsenatorial bearing – but that will quickly pass in the Republicans’ euphoria over Scott Brown and in a new flurry of slick McMahon campaign commercials. (The Face the State interview is viewable at http://www.wfsb.com/facethestate/index.html.)

McMahon, who is no Arnold Schwarzenegger or Jesse Ventura, is best understood as the banal corporate face of one of the sleaziest operations in the land, but also one nurtured over the years by Connecticut’s political establishment – former Senator and Governor Lowell Weicker is a charter member of the WWE board of directors. (Citing their long friendship, Weicker had endorsed Dodd before he dropped out.)

Where Linda is most shaky to the tea-baggers is in Republican bona fides; the record shows that she is a bipartisan money-grubber. Nearly half of her political donations over the years have been to Democrats, including contributions to Rahm Emanuel’s congressional campaigns in Illinois. In something of an “I didn’t inhale” moment, McMahon explained those at a campaign appearance – captured on a truly illuminating YouTube segment – as mere costs of doing business, which were “not politically motivated.”

It is not known whether Emanuel, now President Obama’s Chief of Staff, returned the favor by being instrumental in the Nobel Laureate’s disgraceful decision to provide WWE’s Tribute to the Troops, a Bob Hope-style holiday special of patriotic gore on NBC, with the imprimatur of a taped presidential greeting to the men and women in uniform in Afghanistan.

But the apotheosis of McMahon’s genius for strange bedfellows is none other than Joe Lieberman, lightning rod for all things Democratic, independent, and just plain perverse in Connecticut politics. In 2002 Lieberman, a champion of “family values,” was on the advisory board of the Parents Television Council, which had to pay $3.5 million to WWE to settle a lawsuit after PTC’s president, Brent Bozell, spearheaded a pressure campaign on advertisers to boycott WWE programming. PTC had made defamatory statements falsely holding WWE responsible for the deaths of four children.

Yet by 2006 Linda McMahon and her husband were donating $2,000 to Lieberman’s Senate re-election campaign. Why, she was asked on Face the State.

Irvin Muchnick, author of CHRIS & NANCY: The True Story of the Benoit Murder-Suicide and Pro Wrestling’s Cocktail of Death, blogs at http://wrestlingbabylon.wordpress.com