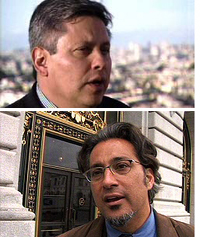 After winning passage of tough new restrictions on condo conversions, tenant activists are now moving to eliminate other incentives for speculator evictions. On Wednesday, the Board of Supervisors Land Use Committee will consider legislation sponsored by Supervisor Ross Mirkarimi to prevent landlords from eliminating tenants parking spots, decks, and even bedrooms without just cause. Supervisor Sandoval will soon have a hearing on his measure to require rental units that convert to ownership to meet modern building codes. Both of these measures could wind up on the November ballot if vetoed by the Mayor, as could a more controversial measure that would prevent the Sheriff’s Office from spending public funds on carrying out the eviction of senior or disabled tenants.

Following the passage of legislation that prevents units where protected tenants have been evicted from becoming condominiums, some might assume that tenant activists would take it easy for a while before promoting new measures. But as critical as the Peskin legislation was to deterring evictions, it does not address all of the threats that San Francisco tenants still face.

Consider the situation where a landlord issues a 30-day notice to a tenant stating that they are removing one of their bedrooms so that they can combine the space with another unit. Despite the fact that the loss of a bedroom completely changes the terms of tenancy, under current law a tenant receiving this notice has little recourse.

Similarly, it is an all too common practice for landlords to issue 30-day notices eliminating tenant’s access to decks or on-site parking. These services may well have led the tenant to rent the unit in the first place, but current law allows parking and decks to be eliminated so long as rents are reduced.

Incredibly, current law even allows SRO landlords to deny tenants the right to sit in the hotel lobby. I did a month long jury trial that involved the denial of lobby privileges where we brought in national experts on the important role lobbies play in the lives of SRO tenants. Nevertheless, the trial judge felt he had no choice but to allow the landlord to reduce rents in exchange for preventing tenants from sitting in the ground-floor area of their own home.

Supervisor Mirkarimi’s legislation will rectify this unfairness by requiring that a landlord establish just cause before eliminating a basic housing service. This common sense measure will likely have at least six votes on the Board, and will then go to the Mayor for a signature or veto.

As currently drafted, Supervisor Sandoval’s legislation would require that rental units converted to ownership comply with the 2006 San Francisco Building Code. This measure is necessary because the provision in current real estate law that allows ownership units to exist as tenancies in common rather than as condominiums has allowed the former type of ownership units to have lower code requirements (condo conversions trigger code upgrades).

In addition, speculators creating ownership units through converting rental units to TICS are unfairly competing with newly built condos who must bear the expense of meeting higher codes. For example, a developer of condos must provide some on-site parking, but someone converting an apartment building to TICS’s does not.

According to the 2000 census, owners are far more likely to own cars than tenants. Why then should TIC converters not comply with the same parking requirements as builders of new ownership housing? If TIC converters had to play by the same rules as everyone else, the additional cost of creating parking might reduce the profit from Ellis Act evictions in the first place.

Sandoval’s legislation should be heard by the Board in June.

The always visionary Ted Gullicksen of the San Francisco Tenants Union has a new idea for addressing the Ellis Act that could find its way on the November ballot: a measure to prevent the Sheriff’s Office from spending money implementing Ellis Act evictions against senior or disabled tenants.

If a tenant does not vacate following the end of the eviction process, the Sheriff’s Office comes out and forcibly removes the tenant from the premises. The actual use of force is extraordinarily rare, and perhaps unheard of in Ellis evictions where tenants tend not to remain on the premises until the last minute.

So at one level a measure preventing the Sheriff from spending money executing Ellis Act evictions would be purely symbolic. But it so happens that the one-year Ellis notice for tireless tenant activist Jose Morales expires next November. The 77-year old Morales has made it clear that he will have to be dragged out of his longtime home, and with or without the proposed ballot initiative there will be hundreds of sympathizers circling Morales’ flat come the day for the Sheriff to execute the writ.

If the ballot measure passes, Sheriff Hennessey would not be able to execute the writ against Morales, leaving the landlord to pursue other legal remedies. A court order could put Hennessy in the same position his former mentor, Richard Hongisto, found himself in regard to the 1977 evictions at the International Hotel.

In that case Hongisto went to jail before deferring to the court and evicting the tenants. But there was no law preventing Sheriff Hongisto from evicting elderly tenants, which is why some believe that the battle to save Morales would be strengthened by the passage of the proposed initiative.

Although the real estate market for buying condos and TIC’s is declining, San Francisco rents are rising (there has long been an inverse relationship between the two, as spurts in purchasing reduce rental demand). This leads some landlords to try to create vacancies through new eviction strategies, which then brings the tenant counter-reaction in the form of legislation and ballot initiatives.