AFGE’s “Me Too” Moment: When Top Leaders Misbehave, Union Members Pay The Price 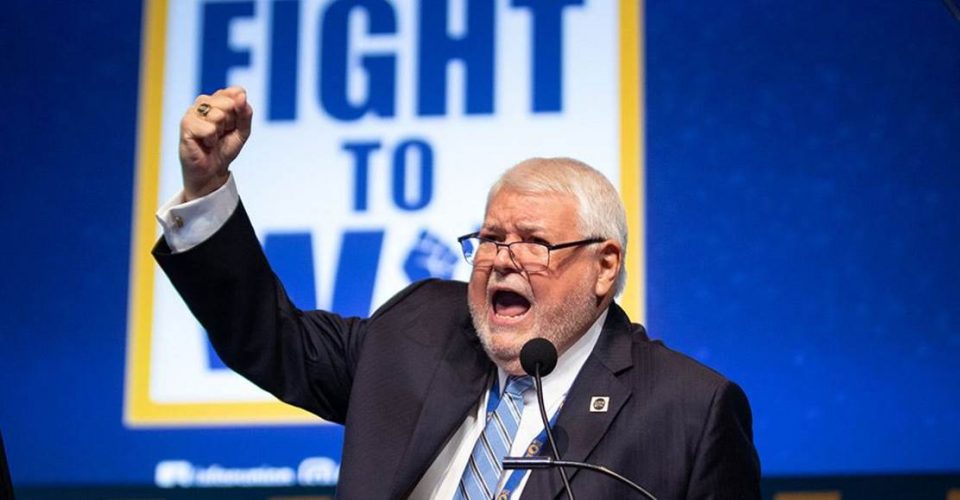 Members of the American Federation of Government Employees (AFGE), who work for federal agencies in San Francisco and other cities, face major threats from the Trump Administration, which is trying to weaken their workplace rights and contract protections.

Unfortunately, a sexual harassment scandal at AFGE headquarters in Washington is making the union’s resistance to Trump much more difficult. This “me too” moment began in late October when Bloomberg News published the first of several investigative reports by Josh Eidelson, a journalist who used to be a UNITE-HERE organizer.

According to these sources, 66-year old Cox “made inappropriate comments about subordinates’ bodies, invited a secretary to shower with him, and suggested he was aroused around colleagues.” Cox’s accusers said that his “behavior has driven away talented employees, violated labor’s values, and undermined the union’s mission.” One called it “the worst-kept secret at AFGE.”

Brett Copeland, now a Democratic Party activist in Iowa, quit as AFGE communications director after enduring repeated sexual harassment by Cox.“I really love the union,” Copeland told Eidelson. “But I cannot imagine ever having to work for him again.”

Even before Bloomberg published further details about Cox’s conduct, the AFGE leader took a paid leave of absence (from a job with total compensation nearing $300,000 a year). In Eidelson’s most recent story, he describes an AFGE headquarters, where “complaints about inappropriate behavior, bullying and bias” were not properly investigated or resolved. (https://www.bloomberg.com/news/articles/2019-11-14/harassment-culture-of-fear-flourished-at-federal-workers-union)

Among his sources this time was Caniesha Washington, an AFGE employee for 12 years and former leader of its headquarters staff union. Washington decided to blow the whistle in the hopes of “keeping this from happening in the future. Dismantling the culture of fear and intimidation is part of recovering from this. It can’t be business as usual.”

Cox has publicly dismissed all accusations against him as “lies and scurrilous, politically-motivated attacks.” He encouraged AFGE’s 300,000 members “not to be distracted from the task at hand,” which is fending off daily Trump Administration attacks on federal workers.

Former AFGE President John Gage told Bloomberg that the quickest way to resolve the scandal was “for Cox to resign” for “the good of the union.” But Gage and four other past officials also urged the current national leadership to investigate who else “may have enabled or covered up this alleged corrupt culture within our union.”

That probe has now been contracted out to Jenny Yang, a former chair of the Equal Employment Opportunity Commission under President Obama. AFGE is apparently refraining from taking any internal action against Cox until her findings and recommendations are received. In an email to AFGE employees obtained by Bloomberg, Yang described her mission as scrutinizing AFGE’s “culture and climate” and its “policies and practices” to “ensure a fair and inclusive working environment.”

Part of AFGE’s institutional problem is the lethargy and complacency of its top leadership. For example, the current political threats to AFGE members were very much downplayed by Cox just after Trump’s election. “I’ve been on this merry -go-round before,” he told the Washington Post in December, 2016. “We’re still going to have a federal government. We’re still going to have federal employees.”

Three years later, at the Department of Veterans Affairs (VA), thousands of workers risk do risk losing their jobs, if further VA privatization efforts lead to dismantling of the agency, where AFGE has its largest single bargaining unit. Trump appointees, like VA Secretary Robert Wilkie, are evicting AFGE local unions from long occupied office space on federal property. Federal employees have been told that they can no longer represent their co-workers in grievance hearings or participate in labor-management meetings, at government expense.

On Nov. 21, Wilkie added insult to injury in a cheeky letter to AFGE Secretary-Treasurer Everett Kelley, who is filling in for Cox. A former staffer for Congressional Republicans, the VA Secretary expressed concern that AFGE has “allowed a culture of sexual harassment to develop and thrive at the highest levels.” While busy undermining AFGE in his own top management role, Wilkie demanded that Kelley personally “protect VA employees who are members of your union from any form of harassment by union officials.”

But they can’t succeed in campaigns against VA privatization and other threats without far more funding, training, and headquarters support. Instead, under Cox, too much dues money has been squandered on union junketeering. AFGE officials who should be leading workplace fights back home are encouraged, as a perk of office, to attend regular out-of-town meetings and conferences, where eating, drinking, and staying in nice hotels is the main order of business.

That’s why just reshuffling the top leadership—after Cox is forced out—will not alter AFGE’s deeply flawed institutional culture. Real change requires that federal employees build a strong rank-and-file movement. And hold AFGE national officers more accountable, in the future, by having the membership directly elect them. (Currently, officials like Cox are chosen by union convention delegates, rather than the rank-and-file.)

The system of political patronage and top-down control that helped turn AFGE headquarters into a hostile work environment has exposed the union to further political attacks and damaging publicity. It will foster continuing organizational dysfunction if members fail to use AFGE’s “me too” moment to win fundamental reform.

(Steve Early was an organizer and international union representative for the Communications Workers of America for 27 years. He is a longtime supporter of union reform movements and the author of four books on labor and politics. He can be reached at Lsupport@aol.com)