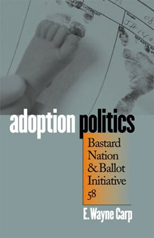 “Adoption Politics” is a lucid and detailed account of the successful 1998 Oregon ballot initiative campaign and subsequent court battles that allowed adult adoptees access to their own original and unaltered birth certificates. Reread that statement and think about it for a moment. Adoptees had to go to the ballot to win something everyone else takes for granted, an accurate record of their own birth. People born and adopted in California are still denied that right.

I’m probably the last person to write an objective review of this book, since I served on the Executive Committee of the Bastard Nation, the organization that conceived the initiative and spun the strategies that won the campaign, during the years described in “Adoption Politics”. As a witness to the events described, however, I am a trustworthy judge of its veracity of fact and texture. Professor Carp has taken the tangled, contradictory, and sometimes self-mythologizing, primary source materials of interviews and correspondence, and woven a narrative that could stand as a primer on how a grassroots organization can take their issue before the people and win.

Politics is people, and the first half of “Adoption Politics” is the story of two adult adoptees; Helen Hill, an artist from the wild Oregon coast, and Shea Grimm, a hard-nosed and brilliant activist from Washington state. Inspired by San Franciscan Randy Shaw’s keynote appearance at Bastard Nation’s first national conference, Hill and Grimm teamed up to draft the initiative and along with the rest of the BN ExecCom, mapped out the campaign strategy and message. Over the next two years Hill and Grimm supported each other, fought the opposition and each other, reconciled, fought some more, and eventually prevailed as Measure 58 carried 57% of the vote and overcame all court challenges. Carp’s narrative then focuses on two men, both adoptive fathers, both attorneys; Frank Hunsacker, who sued the state of Oregon on behalf of six birthmothers who did not want their identities revealed, and Thomas McDermott, who represented Hill to defend the new law and redefine adoption law to include adoptee rights.

The juxtaposition of adoption and politics may seem jarring. Adoption, as promoted and portrayed in the United States, is a sentimentalized moment frozen in time, a portrait of grateful adoptive parents gazing lovingly down at the gift of an adorable baby that was given to them by an angelic and heroic first mother. This first mother has just departed before we, the witnesses, have come upon the tableau, and we never see her face. In reality American adoption is extremely political, a site where discourses of gender, race, class, “family”, and identity are all being contested. Even the language of adoption is politically charged; adoptees whether 8 days or 80 years old are referred to as adopted children, infantilized, frozen in that timeless moment. (Birthmothers fare little better, since they become invisible, in the adoption myth they give their baby in exchange for perpetual anonymity, that is, nonexistence. In the discourse of adoption, birthmothers rarely are allowed to speak for themselves, others claim their voice and carry their standard. The birthmothers who sued through Hunsacker to overturn Measure 58 remained anonymous, Jane Does 1-6.)

“Adoption Politics” begins with a short history of how the American institution of adoption came about, born of the politics and social mores in the first half of the 20th century in a patchwork of individual state laws. Over the decades adoption evolved more or less standardized legal and social service practices that served several social functions; adoption provided outlets, i.e. families, for surplus children conceived in poverty or shame outside of the legal framework of marriage, it gave childless heterosexual married couples the chance to form a family, and adoption redeemed the adoptees from “orphanages” and the ignominious social marker of bastardy. The way the laws achieved this hat trick was by creating “as-if” families. Children adopted into a family were defined by law to be “as if” born to that family, and all records pertaining to the adoption were sealed away, at first from the prying eyes of the public, and then, over time, to the adoptee. The icing on the “sealed records” adoption cake was the alteration of the adoptee’s birth certificate, replacing the birth parents’ names with the names of the adoptive parents. This amended and fictive document, which looks no different from any other birth certificate, is what most adoptees in America possess as the official record of their birth. The birth mother is legally disappeared and the adoptee essentially becomes a creation of the state.

Carp describes how pioneer activists, like adoptee Jean Paton (author of “Orphan Voyage”) in the 50’s, began to seriously question and critique the wisdom of a social policy built on the erasure of history and identity, on what became referred to as secrets and lies. The politics for change in adoption records laws paralleled the greater social and cultural change movements, from the “liberation politics” of the Adoptee Liberation Movement of the 70’s, to the social work and therapy based ideologies of the American Adoption Congress in the 80’s, to the confrontational and rights-based strategies and internet-savvy tactics of Bastard Nation in the 90’s.

The political history of adoption records reform remained constant from Jean Paton’s day until the mid-90’s; sporadic unsuccessful state and Federal lawsuits seeking to overturn sealed records that only yielded bad precedents and isolated and desultory state legislative lobbying efforts that never seemed to get out of committee. (The singular exception to this depressing parade was in Tennessee, where activists and veteran lobbyists Denny Glad and Caprice East managed to break the logjam with a bill that allowed adoptees access to their original birth certificates, albeit with onerous conditions.) Courts and legislatures are small-“c” conservative by nature, especially when deliberating the surrender of a prerogative they have given themselves, in this case the power to decide who may or may not know the facts of their identity.

Interestingly enough, when Bastard Nation began doing outreach to the general public in early 1997, we found that a large majority either supported our right to our unaltered records of identity or assumed that we already had that right. We felt, and rightly so in Oregon, that this was an issue in which the people were twenty years ahead of their representatives, and that a ballot campaign was bound to be successful. I wish I were as sanguine about the future of open records politics in the wake of Measure 58’s success. Measure 58 did not create a cascade of domino campaigns, legislatures in other states looked at Oregon and said, “But we’re not Oregon, what do we care what they do over there. You guys should be grateful you weren’t aborted.” And ballot campaigns are expensive and exhausting, Helen Hill and Shea Grimm took on the personas of movement goddesses, worshipped for their wisdom and sacrifice more than emulated.

The US is among only a handful of nations that seals its adoption records. Our adoption records policy has more in common with the secret police state of the old German Democratic Republic and Argentina under the generals than the UK, Israel, France, or present day Germany. The US and China share sealed adoption records laws in addition to the death penalty. Michel Foucalt hypothesized that the power of the state, whether through a king or a congress, was only fully articulated by its ability to adjudicate the life and death of its citizens. I think that the totality of determining the very identities of its citizens approaches the full articulation of power that Foucalt describes. This profound yet casually wielded state power is what makes “Adoption Politics” a compelling book to those not directly impacted by sealed records laws, because if the state can arbitrarily determine my identity, what’s stopping them from stealing yours?

Ron Morgan is the Community Organizing Coordinator at the Bernal Heights Neighborhood Center. Ron discovered he was adopted in 1991, and joined Bastard Nation in 1996,and served on their Executive Committee from 1997 to 2001.